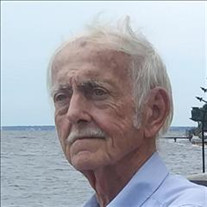 Mr. Alan Benes Vlcek of Jacksonville, Florida passed away on February 24, 2022 after an illness of several months. Mr. Vlcek was born on October 22, 1947 in Chicago, Illinois to Anton John Vlcek of Chicago and Alice Benešová of Prague, Czechoslovakia. His father's career in child welfare saw the family move from Chicago, to Indiana, and finally to Savannah, Georgia, where Mr. Vlcek spent the balance of his childhood and graduated from the Savannah Country Day School in 1965. Mr. Vlcek attended Princeton University, graduating in the class of 1969 with a degree in Politics. He served in the United States Navy as a yeoman on the dock landing ship USS Pensacola from 1971 to 1973, followed by a period in the Naval Reserve. After military service, Mr. Vlcek entered the University of Pennsylvania Law School, from which he received his JD in 1976. In 1975, he married Mary Shea Ganzel of Jacksonville at the Memorial Presbyterian Church in St. Augustine. The couple left Philadelphia and settled on Jacksonville's southside the next year, and Mr. Vlcek spent the following decades working for several local firms before entering solo practice. His legal specialization, admiralty and maritime law, led to professional travel throughout the southeast and abroad, and he developed an impressive expertise in corporate litigation in the maritime and other industries. Mr. Vlcek was a lifelong, devoted sports enthusiast and a loyal fan of his hometown teams, the Chicago White Sox and the Chicago Bears. His other great passions included science fiction literature, reflected in a large paperback library, and politics, which he followed closely, opined on frequently, and in which in his later years he participated as a campaign and poll worker. Despite the wrenching personal struggles that those who knew him will remember well, in the last fifteen years Mr. Vlcek had achieved a measure of peace and clarity and a renewed relationship with his two sons. Until the end he displayed the brilliant, overwhelming intellect, the enormous capacity for feeling, and the sparkling and charming wit that had characterized his life. He will be sorely missed by his family and his friends, on whom his impact was so profound. Mr. Vlcek was preceded in death by his parents; his elder brother, Jan; and an infant sister, Emily. He is survived by brothers David and Peter of Jacksonville; by nieces Elizabeth Deeming of London, England, and Katharine Lazarus of Washington, DC; by sons Andrew (Becky) of Atlanta, Georgia and Edward (Bailey) of South Bristol, Maine; and by their mother, Shea Ganzel Murphy of Jacksonville. Mr. Vlcek will be interred at the Jacksonville National Cemetery at 1:30 PM on March 21, with arrangements by Naugle Funeral Homes.

Mr. Alan Benes Vlcek of Jacksonville, Florida passed away on February 24, 2022 after an illness of several months. Mr. Vlcek was born on October 22, 1947 in Chicago, Illinois to Anton John Vlcek of Chicago and Alice Bene&#353;ová of Prague,... View Obituary & Service Information

The family of Alan Benes Vlcek created this Life Tributes page to make it easy to share your memories.

Mr. Alan Benes Vlcek of Jacksonville, Florida passed away on...

Send flowers to the Vlcek family.