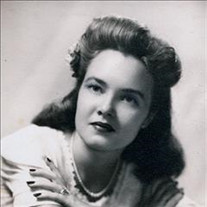 Alice Olliphant Harmon died on Tuesday, January 5, 2021 of complications following a fall. Mrs. Harmon was born in Habana, Cuba of American parents. She was the daughter of George Robert Olliphant, Jr. and Helen Buckley Olliphant, both of Enterprise, MS and Jacksonville. Her father was an international exporter of Southern pine and other lumbers and moved his offices and his family back to the United States in 1930. Mrs. Harmon, a long-time resident of Jacksonville, graduated from Robert E. Lee High School where she was president of IDS Sorority. She then attended Florida State University, the former Florida State College for Women, where she was a member of Chi Omega Sorority. Active in civic work for many years, Mrs. Harmon served as chairman of Duval County's "Lights on for Cancer" fund-raising drive, was a member of the Board of the Duval County Unit of the American Cancer Society where she served as vice-president in 1954. In 1955 she was general chairman of the Duval County Easter Seal Drive for Crippled Children and chair of the Junior Red Cross, later serving on the boards of the YWCA and the Garden Club of Jacksonville. Mrs. Harmon was employed as State Director of Public Relations for the Children's Home Society of Florida and in 1958 was assigned temporarily to serve as Associate Director of the Brevard County United Appeal. In that capacity she and Miss Pat Repper of Jacksonville received national recognition for organizing and directing the first United Fund drive in the Cape Canaveral area at the time great numbers were being attracted there by the new space industry. In 1961 Mrs. Harmon joined the staff of the United Fund of Jacksonville and for several years directed the annual fund-raising campaigns of its residential and special gifts divisions. The Harmons were fond of travel and made many trips throughout the country as well as annual trips to Europe where they enjoyed a number of friends. Her love of travel led to her serving as a travel counselor with Avondale Travel Bureau in the 1970's and 80's. Mrs. Harmon enjoyed her memberships in The Florida Yacht Club, The National Society of the Colonial Dames of America and other local groups including her book and luncheon clubs. Her husband of 39 years, George R. Harmon, former editor of the Jacksonville Journal, predeceased her in 1999. She is survived by her niece, Yvonne Olliphant Traylor (Bill) of Winter Park and nephew, Robert G. Hager, Jr. of Los Angeles; her grand niece and nephew, Elizabeth Traylor Norman of Warrenton, VA and William L. Traylor, III of Winter Park; her great-grandnephew and niece, Andrew Lightner Norman and Miss Isabel Buckley Norman of Warrenton. Owing to the pandemic, services will be held at a later date by St. Mary's Episcopal Church in Enterprise, MS. Memorial gifts may be made to The National Society of Colonial Dames in the State of Florida, The Polycystic Kidney Disease Foundation or the Friends of Willow Branch Library.

Alice Olliphant Harmon died on Tuesday, January 5, 2021 of complications following a fall. Mrs. Harmon was born in Habana, Cuba of American parents. She was the daughter of George Robert Olliphant, Jr. and Helen Buckley Olliphant, both of... View Obituary & Service Information

The family of Alice Olliphiant MacDonell Harmon created this Life Tributes page to make it easy to share your memories.

Send flowers to the Harmon family.