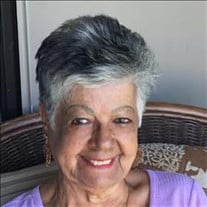 It is with profound sadness we announce the passing of Hilda, our loving and devoted mother, grandmother, great grandmother and friend to all whose lives she touched. Ana Hilda Frias, age 83 passed away peacefully at home, while sleeping on February 20, 2021, after courageously battling lung and brain cancer. She was born February 06, 1938, in San Pedro de Macorix, Dominican Republic to Melida Salcedo and Jose E Frias. She is the loving & devoted mother of Amarilys Rodriguez, Elena Polanco, Gilberto Polanco and Ana Teresa Rodriguez. Hilda was a dedicated mother first and foremost. She especially loved her role as Mami prieta and Mama. She made friends everywhere she went. In 1968, she traveled to New York City to pursue the American Dream. A few years later, she was able to bring her children to New York City. She worked for many years at a printing company in Brooklyn N.Y. After many years of hard work she retired to her loving country Santo Domingo D.R. Most of all she loved her family and instilled in her kids strong values that have served them well. She will be dearly missed and forever in our hearts. Hilda is survived by her children, Amarilys Rodriguez and her husband Angel Rodriguez who took such good care of her during her most difficult days. Gilberto Poland and wife Marta Polanco, Ana Teresa Rodrigues and Luis Rodriguez, Elena Polanco and Joseph Pacheco. Grandchildren: Karla Rodriguez, Angel Rodriguez and Lisa Thompson, Michael and Monika Rodriguez, Ricardo Polanco, Daniel Polanco, Javier Polanco, Alina Polanco, Jason Vendryes, Travis Vendryes and Cynthia Gonzalez ,Kevin Vendryes and Jennifer Belloring. She is also survived by four great grandchildren: Amir Bristol, Lazarus Rodriguez, Jamari Vendryes and Che Rodriguez. She has many brothers, a sister, nieces and nephews, cousins, and longtime friends who will greatly miss her and were touched deeply by her love and devotion. Please join us celebrating her life Saturday morning February 27,2021 between 10:00 a.m. � 12 Noon at Sacred Heart Catholic Church, 5752 Blanding Blvd, Jacksonville, FL 32244 . In lieu of flowers, donations may be made to her charity St Jude to help kids fight cancer.

It is with profound sadness we announce the passing of Hilda, our loving and devoted mother, grandmother, great grandmother and friend to all whose lives she touched. Ana Hilda Frias, age 83 passed away peacefully at home, while sleeping on... View Obituary & Service Information

The family of Ana Hilda Frias created this Life Tributes page to make it easy to share your memories.

It is with profound sadness we announce the passing of Hilda,...

Send flowers to the Frias family.