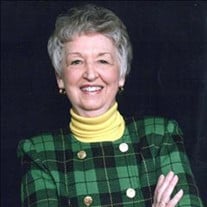 Annette Langford Mayes (Aunt Net), age 79 of Jacksonville, Florida, left this earth to be with her Lord and Savior on September 19, 2020 with loving family members by her side. Annette was born in Greenville, Alabama on August 10, 1941 to the late Tera and C.C. Langford. After graduating high school, she left home for Jacksonville to follow her best friend and sister Shirley. While she began a career in banking, she met and married the late Guy W. Mayes and they had 1 son. After a short period of marriage, she continued in banking and being a single mother. She retired from Wachovia Bank's Global Funds Transfer Department in 2007. She was a hard working person that took pride in her work and was very, very proud to receive a perfect attendance award. She enjoyed going to church, being around her church family and worshiping Jesus. She loved her coworkers and church family just as she did her own family. She was ALWAYS the joker of the group wherever she was. Her favorite thing was dressing up as and playing the role of different characters, especially Elvis. She always said, "You can take anything you want from me, but you will never take my sense of humor." She never stopped being a loving mother, even when times were tough. She always had time to be involved in her son's interest. She was preceded in death by her father C.C. Langford, mother Tera Foyd Langford and sister Shirley Mizell. Annette is survived by her son Gary Mayes, his girlfriend Lara Minerva, grandchildren Keith and Kimberly Minerva, great grandson Cameron Minerva, stepsons Ornie and Alan Mayes and their families, brothers Charles and Freddie Langford, sister Nell Jernigan, many nieces, nephews, and their children. Peace and comfort be with you in the name of God. "See you later alligator, after while crocodile". Mom, we will all... "yakm at ya later". In lieu of flowers please make donations to Community Hospice www.communityhospice.com or tithe to the church of your choosing or to Bryceville First Baptist Church 7732 US Highway 301, Bryceville , Florida 32009 Link to the memorial video : https://www.tributeslides.com/tributes/show/ZFLP6YFWNBB9G5MH

Annette Langford Mayes (Aunt Net), age 79 of Jacksonville, Florida, left this earth to be with her Lord and Savior on September 19, 2020 with loving family members by her side. Annette was born in Greenville, Alabama on August 10, 1941 to the... View Obituary & Service Information

The family of Annette Langford Mayes created this Life Tributes page to make it easy to share your memories.

Send flowers to the Mayes family.