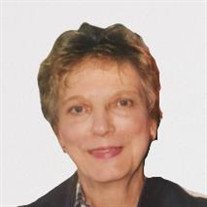 Barbara R. Taylor, 84, passed away on June 12, 2022, in Saint Johns, Florida. She is survived by her daughter Jennifer (Bill) Royse, sister Suzy Benjamin, and nephew Robert Follman. Her husband of 59 years, Merle Taylor, died in July 2021. She is also survived by the family Jesus promised his followers in Luke 18:29 and 30. There are so many to list, but include the Kitts and Devery families, Bill and Susan Laverack, Paul and Deborah Balacich, Ralph and Sylvia Berkeman, Josh and Danielle Oskwarek (Emily, Micah, Jack, Alex), and many, many more. A memorial will be held on June 25, 2022 at 1 pm EST via Zoom. Use this link to join: https://us02web.zoom.us/j/88403563763 You can also go to zoom.us, go to "Join a Meeting" and enter the following Meeting ID and Passcode to join. Meeting ID: 884 0356 3763 Passcode: 103642 Barbara was born two months premature in Queens, New York in 1937 to Robert and Gladys Follman. She was born a fighter, a tough New Yorker with heart. In 1941, she met a neighbor girl named Carolyn. For a reason neither could ever remember, Barbara decided to resolve a dispute between them with her fists, giving Carolyn quite a shiner. They promptly made up and became lifelong friends. Growing up, Easter was Barbara's favorite holiday. She loved to hear about Jesus' resurrection. The idea of God bringing the dead back to life resonated with her in a profound way. She longed to understand God more fully. When contacted by Jehovah's Witnesses as a young woman, she began a serious investigation of the Bible and its teachings. She was thrilled to share what she learned with Carolyn, making up for that black eye. Barbara dedicated her life to Jehovah in 1958 and was baptized that year at the Divine Will International Assembly of Jehovah's Witnesses in New York. Barbara, who always enjoyed accounting, supported herself by working in a bank. She became a full-time minister of the Bible, serving as a regular pioneer when she met Merle Taylor over a slice of homemade banana cream pie. When Merle learned that Barbara baked said pie, he began to, as she put it with a smile, pester. They were married on March 10, 1962 and headed off to Louisiana as full-time ministers. Illness struck Barbara again shortly after her marriage. Her faith was tested as doctor after doctor could not diagnose her illness. Yet, she didn't doubt her God and finally received life-saving treatment in New Orleans. After recovering, she and Merle moved north to New Jersey and the next chapter in their lives. After settling in northern New Jersey, Barbara and Merle welcomed a daughter, Jennifer, and settled into family life. She worked for many years as a bookkeeper for the Carden Educational Foundation. She even developed an inventory management system still used by the Foundation today. So when computers hit the mainstream in the early 1980s, Barbara was an early adapter. Keen to modernize Carden's accounting methods, she proudly acquired and programed an early computer roughly the size of a Volkswagen beetle. In the 1990s, Barbara and her family moved to Brookfield, Ct, where her home and her kitchen were open to everyone. She loved supporting the work of constructing the Patterson Bible Educational Center by welcoming its workers into her home almost every weekend. As she and Merle grew older, the appeal of a warmer climate induced them to move to Hilton Head, South Carolina, where they lived for about twenty years. In 2018 they moved with their daughter and son-in-law to Saint Johns, Florida, where they spent the remainder of their lives as members of the Fruit Cove congregation. Barbara's life was marked by a love for Jehovah, his son Jesus, and her neighbors. Her kitchen was always open, as were her home and her arms. A quote from Julia Child sums up her approach to life, "If you're afraid of butter, use cream."

The family of Barbara R Taylor created this Life Tributes page to make it easy to share your memories.

Send flowers to the Taylor family.