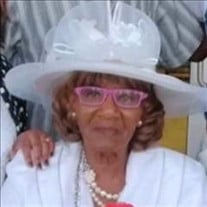 Beatrice McKinnie was born on February 15, 1945 to the late Henry and Gladys McKinnie in Lyons, Mississippi. She was the 7th of 14 children born to this union. In her early childhood, she picked and chopped cotton while attending school to help bring in money for her mother and father. As she grew, she and her sister Loyce went to a tent revival and was filled with the Holy Ghost under the leadership of the late Lester Lockhart of Rose Chapel COGIC. It was there where she developed her love for the Lord. As her love for God deepened, so did her passion for winning souls into His Kingdom! Her lovable and kind spirit won the heart of a young man named Frank Rucker. They married in 1962, and to this union 5 children were born. She raised her family in the fear of the Lord, bringing them to church as often as she could. Later, the family relocated to Chicago, Illinois, where she became a member of Healing Center COGIC under the leadership of Dr. Arthur Lockhart. There were many challenges and uphill battles that came her way while living in Illinois, but her faith in God kept her afloat and holding on to His promises! Renewing her commitment to the Lord, she once again became active in her church and began to serve in several auxiliaries such as the Pastor's aide committee, missionary board, choir and outreach. Her love for souls made her special and irreplaceable in her community. Whenever you saw Beatrice, she was spreading the joy and love of Jesus Christ to all she knew. It only took a few moments in her presence and she would have you laughing and telling you of Jesus! Eventually, she relocated to Jacksonville, Florida to be near her oldest child, Deborah, who cared for her until she departed this life. Beatrice resided in The Parkridge Nursing and Rehabilitation Nursing Home where all of the staff and residents loved her and experienced her passion for Jesus and laughter. At the age of 75, a favorite past time of Ms. Rucker's was to play bingo or pokeno. During her time here in the Park Ridge community, she was known as the pretty lady who was always dressed so nice and her makeup was flawless. There was not an activity that she did not attend. We are going to miss seeing her front and centered for church service and range of motion in the mornings. We all here at Park Ridge know that she is now very joyous and celebrating her transition because she is with the one that she loved the most, our Father who art in heaven. We all here at Park Ridge want to say, "Ms Beatrice Rucker we love you, we miss you, and we pray to see you again some day. In 2018, while residing in The Parkridge Nursing and Rehabilitation Nursing Home, she joined Open Tomb Ministries under the leadership of Bishop Gregory and First Lady Angela Strowbridge, where she was honored and celebrated as church mother. Mother Beatrice Rucker was a dedicated and loyal member of Open Tomb Ministries. She was a humble, faithful, loving, caring, kind and giving woman with a sweet spirit. Her biggest joy was when she attended Open Tomb Women's Retreat in Cocoa Beach, FL. She brought a length of knowledge and wisdom to the Open Tomb Ministry Family. She will truly be missed by her Open Tomb Ministries Family. She leaves to cherish her memories, her five children; Deborah Winfrey of FL; Frank Rucker, Jr of WA; Lee Anthony Rucker of IL; Carl Rucker of IL; and Linda Rucker-Jameson of IN, 2 brothers; Joe Willie McKinnie (Elma), and Cleother McKinnie (Patsy) both of Memphis, TN; 2 sisters Gladys Birdsong (Andrew) and Carolyn Mason (Larry) both of Milwaukee, WI, 17 grand children, 2 great grandchildren. Her parents, four brothers and five sisters preceded her in death. She also leaves a host of nieces, nephews, cousins, friends, and her church family. She will truly be missed by all who knew her. However, her loveable impression placed in our hearts will live on forever! God is a promise keeper!!!!

Beatrice McKinnie was born on February 15, 1945 to the late Henry and Gladys McKinnie in Lyons, Mississippi. She was the 7th of 14 children born to this union. In her early childhood, she picked and chopped cotton while attending school to help... View Obituary & Service Information

The family of Beatrice Rucker created this Life Tributes page to make it easy to share your memories.

Send flowers to the Rucker family.