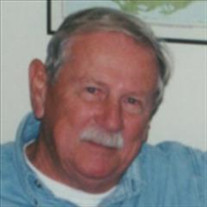 Bert Edwin Bibby, 87, of Jacksonville, Florida died peacefully on Thursday, March 31, 2022. He was a resident of Wyndham Lakes Senior Living and a lifetime resident of Jacksonville and Neptune Beach. Everyone knew Mr. Bibby as "Bert." An avid sportsman and conversationalist, he was known for his love of life and great wit, and he was loved by all who had the pleasure of knowing him. Always the gentleman, he would frequently cut a fresh flower blossom to give to one of the ladies in his community. Bert grew up in Neptune Beach and graduated from Fletcher High School in 1953. Among his many accomplishments there, he was fiercely competitive as an athlete. He played junior varsity and varsity football and won the honor of being chosen to play in the "All Star" Football team, playing in the North-South game in the Gator Bowl in 1953. He was an officer in several service clubs and was voted "Friendliest Boy" by his senior class. Bert graduated from Florida State University in 1958 with a Bachelor of Science degree in Business. He worked his way through college in the cafeteria and was made Cafeteria Supervisor in his junior and senior years. Following graduation, Bert realized that his military obligation was the next thing on the agenda, so he enlisted in the USAF Florida Air National Guard and served from 1958 to 1961. Upon completion of his military service, Bert worked for two years as an insurance adjuster before entering the food brokerage business where he spent the next 21 years, retiring in 1985. He worked for Campbell Soups and food brokerage companies Vail-Inman and Budd-Mayer, frequently earning top honors for outstanding salesmanship. Never one to sit for long, he enjoyed working part time as a courtesy driver for O'Steen Volvo for several years post-retirement. Bert was preceded in death by two wives, Camille Whitehurst (Lewis) and Patricia Pascoe (Carroll); and two brothers, Robert "Bobby" Bibby of Jacksonville and William "Billy" Bibby of Port Orange, Florida. He was also preceded in death by his parents Bertram Cecil Bibby of Alabama and Helen Mae Parnal Bibby of Chicago, Illinois. He is survived by son William "Bill" Bibby and wife Martha of Georgetown, Florida; daughter Rebecca Nostrant and husband Ernest of Jacksonville, daughter Terrie Camille Partin of St. Augustine; two stepsons, David Carroll and wife Gigi, and Steve Carroll, both of Jacksonville; grandchildren Ted Bibby, William Gold, Bert Gold, Haley Partin, James Partin, Gina Manning, Ben Carroll, and six great-grandchildren. A memorial service will be held Friday, April 8, 2022 at 10:00 a.m., at Naugle Funeral Home in San Marco. Cameron Naugle is inviting you to a scheduled Zoom meeting. Topic: Bert Bibby Memorial Service Time: Apr 8, 2022 10:00 AM Eastern Time (US and Canada) Join Zoom Meeting https://us02web.zoom.us/j/83550082008?pwd=L0V5RkpEbWVvelZHUForK1hxTUdLZz09 Meeting ID: 835 5008 2008 Passcode: 499382

Bert Edwin Bibby, 87, of Jacksonville, Florida died peacefully on Thursday, March 31, 2022. He was a resident of Wyndham Lakes Senior Living and a lifetime resident of Jacksonville and Neptune Beach. Everyone knew Mr. Bibby as "Bert." An avid... View Obituary & Service Information

The family of Bert Edwin Bibby created this Life Tributes page to make it easy to share your memories.

Send flowers to the Bibby family.