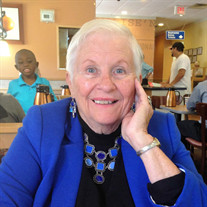 Betty Jean Richardson Roman Long, 88, of Jacksonville Florida died December 28th, 2019. She is survived by daughter Nancy Roman and partner Patrick Farrell of Westerville Ohio. Born December 31st, 1930 in Topeka Kansas but given up for adoption through the Salvation Army Children’s home, she was adopted by the Richardson Family in Wichita Kansas. After her adoptive mother died in 1937, the family moved them to Oklahoma City, and she was placed into foster care with the Frost Family of Shidler Oklahoma. Her early education was at Mount Carmel Catholic Boarding school in Guthrie Oklahoma. She attended Northern Oklahoma Junior College and University of Central Oklahoma attaining a master’s in library science. Betty married Grant Barber Roman in October 12, 1960. Grant passed away in July 1962. Betty had several careers and was very proud of her time with the Oklahoma City Public Schools where she worked primarily as an administrative assistant as well as helping with academics and administration for special education students at Bryant School. Mom was always working towards helping anyone with a disability or unfair advantage. Upon her retirement, she returned to Shidler Oklahoma and married Bill Long in 1976. Bill passed away in 1983. In 1985, She returned to Oklahoma City and worked for Standard Testing and Engineering until she retired again in 1995. Never to be without some type of work, mom began working for a local floral nursery and stayed there until Lowe’s built in the area. At Lowe’s she was the department manager for the lawn and garden section until she left in 2000. Betty moved in with her daughter in 2000 where they lived in Minnesota, Detroit, Winder Georgia and Jacksonville Florida. She was an avid reader, seamstress, gardener and card player especially bridge and Canasta. She loved all cats and dogs and never tired of being in the sun and gardening. The family is so grateful for the love and care provided in her final years from Anne Marie and Gary Knight as well as all the staff at Silver Shores Living Facility. In Lieu of flowers the family requests donations to Dave Thomas Foundation for Adoption to ensure all children have forever homes.

The family of Betty Jean Richardson Roman Long created this Life Tributes page to make it easy to share your memories.

Send flowers to the Long family.