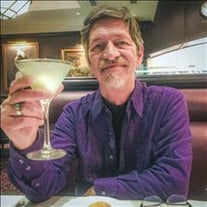 Bruce (B) made his last sarcastic eye roll with a peace sign on September 11, 2020, when the hospice nurse asked him, "How are you doing?" B transitioned after a short battle with a nefarious villain named Cancer, who has plagued our world... View Obituary & Service Information

The family of Bruce Alan Lehnus created this Life Tributes page to make it easy to share your memories.

Bruce (B) made his last sarcastic eye roll with a peace sign...

Customized sympathy cards. Mailed for you.