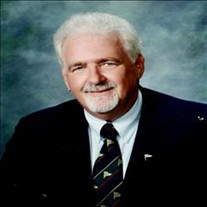 Scott, Bruce Angus - 9/25/1946 to 1/8/2021 An impressive giant among men, Bruce Angus Scott, died last week as he lived: quietly commanding respect and showing strength, while treating everyone around him with equality, affection, honesty, kindness and love -- like only a true gentleman would. Bruce, a nearly lifelong resident of Jacksonville, navigated many roads in life, exploring them as a fervent traveler, motorcycle and RV enthusiast, Army Staff Sergeant, Jacksonville Sheriff's Officer and Detective (the youngest at the time), on-air radio personality with WAPE and decades long career as an entrepreneur who revolutionized the home security industry along the way. By 1985, he had parlayed what began as his night job of many years at Scott and Murray Guard Dogs into a small alarm company, Scott Alarm, selling home burglar alarms by day and installing them himself at night. As the business grew, he recognized the need for unity in this new industry, introducing an alarm dealer association in the state of Florida, which later became the alarm association for all dealers in the United States. Scott Alarm was the largest independently owned alarm company in the country when Bruce sold the company to Republic Industries in 1996. Always seizing new opportunities, he pursued his passion for motorcycles with four "Big Bike" dealerships throughout Florida from 1998 to 2003 and was instrumental in launching and branding a rereleased Indian Motorcycle, until returning to his first love and reintroducing Scott Alarm in 2004. Many throughout the Southeast will never forget his famous jingles and radio commercials with his velvety baritone voice, declaring "Crime Makes Me Mad" and "Scott Free, Scott Alarm". Along the way, Bruce was the original "Protector of the Game" sponsor of the Jacksonville Jaguars, never missing a chance to support his home team and the city he proudly called home. He was the founder of "The Seven Bridges Run", launching the annual motorcycle ride in 2001 to benefit Dreams Come True, a local organization dedicated to fulfilling wishes of children facing life-threatening illness. One of his proudest accomplishments was being a single father to his son while earning $80 per week on a police officer's salary in the late 60's to early 70's. Defying many odds, Bruce worked tirelessly from humble beginnings and his infectious smile and friendly, easy manner were a genuine reflection of the gratitude he felt, every day of his life. He dispensed valuable advice, loved beginning a familiar tale or unique pearl of wisdom with "Let me tell you something...", and gave others the opportunity to lead and grow under his mentorship. Bruce had a wonderful sense of humor and uncanny ability to remember darling jokes and doo-wop songs and often let you win at checkers, just because he could. He fought a good fight, with his health the last few years, then Covid-19, and yet neither will extinguish his light. Even in his last months and days, he showered everyone he encountered with his legendary smiles, kind words and compassion, from his family and friends to the brave and caring nursing staff around him at the end at Baptist South. And that's how Bruce Angus Scott lived - he kept the good ones close, always, and gave those he loved roots -- and wings. What remains are beautiful memories of rides through the mountains, laughter, music, adventure and a storybook romance with the love of his life who shared his life and passions, his wife of 24 years, Susie N. Scott. Bruce is deeply missed, and he will never be forgotten by those he leaves behind, his wife Susie, his son, Tim Scott (Jennie), daughters, Angeline Renee Cook (Ed "Max" McClamma) and Nicole Green, grandchildren, Lavoris Mobley (Alexa), Tyler Scott (Jessica), Katie Scott (Will Wesley) and Molly "Mojo" McClamma, along with every employee of Scott Alarm and Big Bike/Indian Motorcycle whom he loved and treated like family, and his circle of loyal friends including his fellow Blue Knights Law Enforcement Motorcycle Club, NARC police pals, his weekly breakfast buddies group and everyone who ever joined him on the annual "guys ride". He was preceded in death by his father, Donald Angus Scott and his mother, beloved school teacher and Scott Alarm ambassador of hugs, Verneil "Nana" Scott. In lieu of flowers, please consider a donation to the non-profit Mandarin Community Club in Bruce's honor, where he was an active member for almost two decades. We ask that you think of Bruce when you patronize Enza's or Vito's Italian restaurants, the latter where he had his first date with Susie and many joyful memories were made over the years with family and friends. Bruce's services will be livestreamed on Monday, January 18 at 11AM at this link: with a celebration of the amazing life he lived planned in the summer.

The family of Bruce Angus Scott created this Life Tributes page to make it easy to share your memories.

Send flowers to the Scott family.