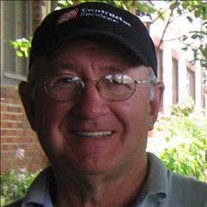 Charles “Chuck” F. Peterman, Sr., 78, originally from Conneautville, P.A. passed into the arms of Jesus in Jacksonville, Florida, on Monday, August 17, 2020. He was born at home on November 27, 1941 to the late Charles B. Peterman and Estelle Briggs Peterman Steiger. Chuck loved his Lord, his family and his friends with his whole being. He was the sixth child and first son of ten children. He has seven sisters and two brothers. He grew up on a farm, learned to live off the land and had many adventures with his brothers and sisters. He graduated from Conneaut Valley High School, and he worked for 25 years at Abex Corporation where he retired as a General Manager. He became a business owner of A1 Stainless Steel in Conneaut Lake. All through life he enjoyed sports, carpentry, auto mechanics and masonry on the side. He was a “jack of all trades and master of them all.” He was an athlete, singer, gardener, carpenter, leader, hunter, and fisherman. His greatest joy was spending time with his relatives, children, grandchildren, and great- grand children playing games, walking in the woods, travelling, singing and hunting in Colorado. He was a charter member of Conneautville Church of Christ since he was a teenager and later served as an Elder. He was a wonderful and generous man, who would drop everything to help someone else, and would literally “give the shirt off his back” to help another in need. (Col. 3:17) In his later years, he had a traumatic accident that caused a brain injury leading to a battle with Alzheimer’s. During this time, he began to hand make hundreds of crosses out of Walnut and Ash to give to anyone as a witness to his personal faith in Jesus Christ. He was a strong man, with strong hands and strong faith. Chuck is survived by a son, Charles, Jr. (Dana) Peterman, and daughter, Julie (Lee) Hall; five Grandchildren, Ryan (Kaley) Peterman, Aaron (Kelsie) Peterman, Jessica (Sean) Hall Rushmore, Nathan (Morgan) Peterman, Tessa (Phillip) Hall Combs; nine Great Grandchildren, Kensington, Hannah, Liliana, Owen, Silas, Cora, Cade, Hope, and Colt. He is also survived by five Siblings, Elsie (Carl) Smith, Gert (Richard) Panko, Pat Bailey, Judy Popham, and Tom Peterman, as well as many cousins, nieces and nephews. Chuck was preceded in death by siblings Estaleta Blackhurst, Margaret Taylor, Virginia Henry, and Russell Peterman. The Celebration of Life will be held on Saturday, September 5th at 2 p.m. at the Conneautville Church of Christ. The service will be Live-streamed on the Conneautville Church of Christ Facebook page. The family suggests all donations made in the memory of Charles F. Peterman, Sr. be sent to Conneautville Church of Christ, 1308 Main Street, Conneautville, PA, 16406. Arrangements under the care of Naugle Funeral Home & Cremation Services, 1203 Hendricks Avenue, Jacksonville, Florida 32207. (904)396-1611

Charles “Chuck” F. Peterman, Sr., 78, originally from Conneautville, P.A. passed into the arms of Jesus in Jacksonville, Florida, on Monday, August 17, 2020. He was born at home on November 27, 1941 to the late Charles B. Peterman and Estelle... View Obituary & Service Information

The family of Charles Fredrick Peterman, Sr created this Life Tributes page to make it easy to share your memories.

Send flowers to the Peterman family.