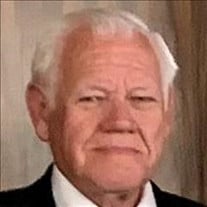 Claude James Painter, 80, moved on to his Eternal Home with the Lord surrounded by his loving family on Thursday, Aug. 5, 2021, in Jacksonville, Fla. He was born in Hillman, Mich., October 14, 1940. He is survived by his wife and the love of his life, Esther May (Holiday); children Donita Dianne (Painter) and Joshua Manning, Eric Kyle and Anna (Anya Michaelovna Khozyainova) Painter, and Deanne Kristin (Painter) and Brian David Roes; grandchildren Alexander Mack Roes, Brendan Gabriel Roes, Audrey Kathryn Roes, Safiya Constance Painter, Naya Orliyah Painter and Nikita Liam Marcus Painter. He is also survived by sisters Lois (Harold) Sanford and Carolyn (Al) Cleveland, as well as several nieces and nephews. He was preceded in death by sons Marcus Waring and Soren Eric, as well as his parents, James and Carol Painter. Claude's life was about loving God through service. As head of the greeting ministry at Beth Israel Messianic Synagogue in Jacksonville, Fla., he was usually at the door welcoming members and visitors. For many, their first memory of Claude, in his bright suspenders and ties, is inviting them in with his warm and inviting smile. He further connected people by opening up the Shalom Center and making coffee for a fellowship time after the weekly service. He was a frequent backup singer on the worship teams, including his children's. And he always showed up on work days, tools in hand. At Congregation Shema Yisrael in Rochester, N.Y., he served nearly 20 years as Elder, heads of the tape/CD and greeting ministries, and bookkeeper of the Fig Tree Bookstore, which was managed by Esther. And he always showed up on work days, tools in hand. Before this, he served in various leadership and service roles in the churches he attended. As a young man, he sang bass in quartets and with Rochester Youth For Christ's Joy Singers for a decade. He also loved God by loving people. He was the neighborhood handyman, and frequently just went and mowed neighbors' lawns. He bought books to pass on to those he felt needed them. He would purchase a gift, pass out a few bucks, help with a task or give a kind word, all to encourage someone. Through this, Claude became like a father to many. And of course, he was there with whatever his children and grandchildren needed: attending recitals, concerts and sports events, babysitting, and fixing or building something. Claude loved to build, his greatest achievement being remodeling his New York house, himself, room by room, from the studs up. In recent years he built picnic tables using his innovative design. He loved to garden, and had a beautiful micro-citrus grove in his backyard. During his life, he raised dairy goats and black sheep and was skilled in machine knitting. He loved to write poetry and hymns and translate Hebrew songs into English. He was well-known and loved for sharing stories from his life, which culminated with his writing an autobiography this past year. During his professional life, he was a school teacher and computer programmer. He also served in the Air Force as a linguist stationed in Japan, during which time he learned Russian and Japanese. Viewing and visitation held 9-11 a.m. Friday, Aug. 13, at Naugle Funeral Home (1203 Hendricks Ave. Jacksonville, FL 32207). A United States Military Graveside Service will follow from 12:30-1 p.m. at the Jacksonville National Cemetery (4083 Lannie Rd., Jacksonville, FL 32218). In lieu of flowers, the family has established the Claude Painter Memorial Fund to support his wife, Esther, during future life transitions. Contributions can be made at: .

Claude James Painter, 80, moved on to his Eternal Home with the Lord surrounded by his loving family on Thursday, Aug. 5, 2021, in Jacksonville, Fla. He was born in Hillman, Mich., October 14, 1940. He is survived by his wife and the love of... View Obituary & Service Information

The family of Claude Painter created this Life Tributes page to make it easy to share your memories.

Claude James Painter, 80, moved on to his Eternal Home with the...

Send flowers to the Painter family.