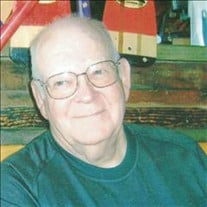 Delbert Lynn Hosic passed away in Jacksonville, Florida, on July 4, 2020, at the age of 84. Del was born in Ashland, Nebraska to Delbert Franklin Hosic and Shirley (Shelley) Hosic, on May 19, 1936. Del was known as "Lynn" until he joined the Navy, where he was told he had to go by his first name. Del graduated from Ashland High School and then joined the Navy where he trained to be an Air Traffic Controller. He left the Navy as a First Classman and went to work for the Federal Aviation Administration. He worked as an Air Traffic Controller several years, then became involved with the evolving of air traffic to computers. He was there at the very beginning and co-wrote the first computerized program for air traffic control. There were many harrowing days during this conversion, but he never faltered. He earned his BBA degree from Jones College during this time. He became the Data Systems Officer and retired in that position. He worked for an aviation government contractor for a few years before retiring completely. Del is survived by his wife of almost 49 years, Linda; brother Bruce Hosic (Karen) and sister Meryl Breemes (Paul); daughters Pamela Palm (Gus), Rebecca Tate (Rick), and Michele Copa (David) whom he loved as a daughter, and son Bruce Hosic (Rafaela); grandchildren Stephanie Palm (Brandon), Christine Jabour (Rami), Caroline Palm, Myshka Ouinones, Delbert Hosic, Gerald Hosic, and Nicole Hosic; and Daniel Copa and Hilary Copa; and great grandchildren Miguel Nieves and Camila Puckett. In his youth Del worked with his dad in water well drilling and spent many summers working with his grandfather Shelley on his farm in Missouri. You had to know Del to appreciate this-his favorite memory from the farm was driving a tractor in the field, no one within earshot, singing country songs at the top of his lungs! He learned so much from his dad and grandfather, including fixing almost anything. He always said back then "you didn't buy new - you made do". This ability followed him throughout his life and helped so many. He developed a great love for woodworking and became so skilled that at one time he was known as the man to go to for restoring antique furniture (a highly skilled talent). He made many beautiful pieces that grace several homes. Del was a gentle man who walked this earth with grace and dignity, treating everyone he met with the utmost respect and kindness. He never made enemies, only friends. He loved his family dearly and was so proud of each of them. He was an avid reader and continually impressed me (his wife) with his knowledge. Even after almost 49 years, he was still surprising me with one or more new facts almost daily. He simply was the best person I ever knew. He was my soulmate, my best friend, my everything. He will be forever in the hearts of all who loved him. Please be sure to sign the online registry at www.nauglefuneral.com. Arrangements entrusted to Naugle Schnauss Funeral Home & Cremation Services, 808 Margaret Street, Jacksonville, Florida 32204, 904-683-9288

Delbert Lynn Hosic passed away in Jacksonville, Florida, on July 4, 2020, at the age of 84. Del was born in Ashland, Nebraska to Delbert Franklin Hosic and Shirley (Shelley) Hosic, on May 19, 1936. Del was known as "Lynn" until he joined the... View Obituary & Service Information

The family of Delbert Lynn Hosic created this Life Tributes page to make it easy to share your memories.

Delbert Lynn Hosic passed away in Jacksonville, Florida, on July...

Send flowers to the Hosic family.