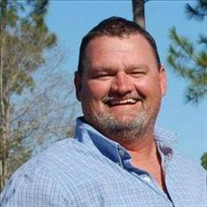 Dudley Michael Broussard, age 48, died on October 12, 2020 at his home in Jacksonville, FL. Born and raised in d'Iberville, MS, Dudley was proud of his 30 year career in Underground Utilities spanning through Texas, Louisiana, Mississippi, Alabama and Florida. Dudley is survived by his wife, Dianna Broussard, his son's Devon Hughes (Diana Hughes) and Corbin Merrill, as well as his daughter, Emily Broussard. Dudley also had two precious and much beloved granddaughters, Delilah Marie Hughes and Daphne-Rose Monroe Hughes who will miss their Paw Paw dearly. He is also survived by his siblings, Nancy Broussard Seymour (AJ), Sonja Broussard, Victoria Broussard and Ronnie Broussard (Kelleigh), Colleen Nutefall Ladnier (Jimmy) and Mike Nutefall (Danielle) and step-mother, Sandra Broussard. Dudley is also survived by Deborah Christ (Mike), Billy Hughes (Susan), Claudia Hughes and Darin Hughes (Kim) as well as multiple nieces, nephews, cousins and friends. Dudley is preceded in death by his father, Ronald "Coo Coo" Broussard and his mother, Shirley "Candy" Broussard, nephew, Michael Lynch and brother-in-law Dean Hughes. Dudley's greatest joy in life was his granddaughters. Together the three of them spent countless hours looking for shells on the beach, playing in the local parks, watching cartoons and him listening to the endless stories that Delilah always made up to keep him entertained. There was never a man that loved his girls as much as Dudley did these two. Dudley enjoyed coaching Little League Baseball and even after his son grew up and moved on from the sport, he would still attend games to watch the next generation play his favorite sport. He never spared his advice and coaching skills to any child that requested it. On any given weekend, Dudley could be found riding through the city of Jacksonville looking for garage sales or sitting on a pier with a fishing pole in his hand. He loved spending time skeet shooting and hunting with his son every chance he got. Dudley also enjoyed restoring and repairing trucks while preparing dinners on his favorite smoker surrounded by his family and friends. He also enjoyed spending time at the French Club every trip back to Biloxi where his father was a lifelong member. Dudley lived life as if every minute was the last. He was a wonderful husband, father, grandfather, brother, son and friend. He loved this country and was a true patriot. His job here on earth is now done and he can finally rest in peace, fishing in heaven with his much loved Daddy .In lieu of flowers, the family requests memorial donations be made in his name to St.Judes Children's Research Hospital. A memorial service will be held on November 1, 2020 at the Fleur De Lis Club (The French Club) located at 182 Howard Avenue, Biloxi MS 39530 at 1:00 p.m to 3:00 p.m.

The family of Dudley Broussard created this Life Tributes page to make it easy to share your memories.

Send flowers to the Broussard family.