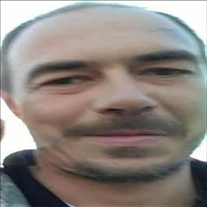 Dustin Allen Loyd, 37, and his fianc�, Tina Hall, both of Gadsden, Alabama were killed in a tragic accident on December 12, 2020 in Jacksonville, Florida. Pastor Tommy Marshall will officiate Dustin's memorial on Wednesday, January 6, 2021 at 1:00 pm at The Tabernacle Church on S. 11th St. Visitation with the family will be held prior from 12-1 pm. A celebration of life service will be held afterward at 3pm at the park where Dustin played growing up at Walnut Park Elementary. Dustin grew up in "The Park" with his fellow" Kool-aid kid" friends and Vancourtland St was filled full of memories for him. He loved fishing with his Papa and Papa JC from a very early age, so much so, that they would have to hold on to his belt loop every time he caught a fish so he wouldn't get pulled in. He loved riding bikes, motorcycles, and his low rider. He talked about his 4 children that he loved so very much constantly. He was his mother's Sunshine and was a free bird who never stayed still for very long. He loved traveling, camping, hiking and listening to all types of music.. He was the pesky little brother, that his aunt never had, who at 2 yrs old he nicknamed Aunt Cher-Chee (later shortened to Aunt CH). He was the 1st grandchild born on both sides of the family and while remaining that way for many years, he was spoiled rotten by his Mamaninnie and Nana. He was preceded in death by his Aunt Deandra "DeeDee" Bolding and Uncle David "Float" Loyd, Grandfather, Ray Loyd, Great Grandparents, Virginia and J.C. Kilgore and Kenneth Bolding Sr., and Great-Great Grandmother, Freddie George Osborne. He is survived by his 4 children, Carlie, Kenzie, Jordyn, and Landon, his parents, Kendra Loyd and Tim Loyd (Renay), brothers, Austin Loyd and Joseph Redding, step siblings, Stephen and Sabrina Layfield, grandparents, Reba Gilbert, Sandra Kilgore and Kenneth Bolding Jr., great grandmother, Marjorie Bolding, aunts, Charity Haney, Renee Hill (Ricky), and Lavada Elrod (Brent), great aunt, Peggy Braswell and great Uncle, Rodney Bolding as well as a host of cousins and nieces he was very close to throughout his life. Honorary pallbearers will be Ricky Hunter Sr., Colton Haney, Austin Loyd, Justin Redding,, and Greg Vanpelt. The family would like to thank those who have poured out their love and generosity, calls, texts and help during this difficult time. Flowers, cards and anything else will be welcomed at the memorial.

The family of Dustin Allen Loyd created this Life Tributes page to make it easy to share your memories.

Send flowers to the Loyd family.