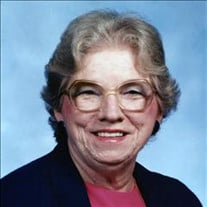 Earline Harden Anderson, 87, passed away on July 1, 2020 at her home in Jacksonville, Florida. She was born on February 7, 1933 in Daisy, Tennessee. Earline spent her childhood years in the Chattanooga area. Her family moved to the Miami area just as she entered her teen years. She attended Coral Gables High School, where she played trombone in the marching band. After graduation she returned to Tennessee, married and had two children. She was a faithful and active member of Brooks Memorial Methodist Church in Lupton City, where she sang in the choir and taught Vacation Bible School. In 1967 she moved to Jacksonville, Florida where she worked for Jackson's Minute Markets, Little Champ Food Stores, Dandee Foods and The Hamilton Collection. She also became a member of First Baptist Church, where she again sang in the choir. She returned to the Chattanooga area in the late 1990s, settling in Hixson. She worked for Republic Parking for 18 years at the West 3rd Street garage, where she made countless friends and brightened everyone's day with her sparkling smile. In August of 2019 she moved back to Jacksonville to share the rest of her days with her daughter. Earline had a lifelong love of music, especially singing church hymns and playing the piano. She also had a great love for her pets, most of whom she had rescued and adopted from animal shelters. She deeply loved her family and many friends, and was greatly loved in return. Earline was preceded in death by her father William Earl Harden, her mother Gladys Davidson Starnes, and her son, Charles Earle Woy. She is survived by her daughter Mary Woy Atwood (Richard), grandson Christopher Atwood (Maya), her sister Janice McCreless (Bill), nephews Gene McCreless and Kevin McCreless, and her sister-in-law Margaret Davis (Paulette Meeks). Due to the current COVID-19 pandemic, no public services will be held. A private memorial service for family members and close friends will be held in the Chattanooga area at a later date. Donations in Earline's memory may be made to the Humane Education Society of Chattanooga (212 North Highland Park Avenue, Chattanooga, Tennessee, 37404), the Jacksonville Humane Society (8646 Beach Boulevard, Jacksonville, Florida, 32216) or to any safe animal shelter of the donor's choice.

Earline Harden Anderson, 87, passed away on July 1, 2020 at her home in Jacksonville, Florida. She was born on February 7, 1933 in Daisy, Tennessee. Earline spent her childhood years in the Chattanooga area. Her family moved to the Miami area... View Obituary & Service Information

The family of Earline H Anderson created this Life Tributes page to make it easy to share your memories.

Send flowers to the Anderson family.