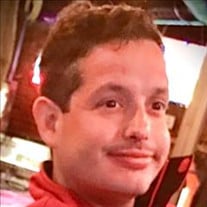 Eric Lamon Sternberg Cabal came into this life the first day of September 1980 and passed the first day of Winter 2021. He was born in Puerto Rico to his proud, though inexperienced, loving parents, Reyna and Tim. After 2 years of idyllic island life, he moved first to Miami, then Washington, DC, and finally to Charleston, where he lived his childhood. It was there he attended Blessed Sacrament Catholic School, and started meeting, and accumulating, many loving friends. His one sibling was born there, and Eric was aware of the pregnancy before his mother, and by the time she came home that day, had already predicted a brother and named him Steven. Eric moved with his family to Panama when he was 10, and there spent a wonderful 5 years, surrounded by extended family in paradise. He was loved by every relative, made friends with every schoolmate and cousin, and a special kindred relation grew with his first cousin Alvaro, the son of his mother's twin sister. With his dad's new set of Navy orders, Eric and his family moved back to Charleston in 1996, where he attended Bishop England High School, and continued embracing old friends and making new ones. He went to the University of Central Florida, earning his Bachelor's and Master's degree in 4 years, and of course, meeting multiple lifelong loving friends. After graduation, he entered the Army Corps of Engineers, and served a dedicated and productive15 years. USACE assignments included Tacoma, Mobile, Savannah, and finally Cincinnati, of course meeting and retaining friends along the way. Always wanting to serve and be of help, his favorite assignment was being sent back to his homeland Puerto Rico to assist with relief and recovery following the deadly Hurricane Maria in 2017. An audiophile, Eric enjoyed playing musical instruments and discovering new indie bands. Also a dog person, he raised many a wonderful canine, and one of his last acts was again taking on an innocent stray. Though unaware and asymptomatic the first 30 years of his life, Eric had a genetic incurable disease that made its ugly manifestation known while he was in Cincinnati and forced him into a medical retirement in 2019. Never having done a thing to bring this curse on, he accepted with courage and determination every recommended treatment, despite the miserable side effects. He will forever be his father's hero. He finally found joy in life over the last several months, when the angel Stacy, a classmate from Panama middle school, came into his life, loved and took care of him, and to which he optimistically became engaged. This wound hurts. The void and sadness he left with us remaining is infinite and depthless. He will forever be loved by his aunts, uncles, cousins, friends, brother, mother and father.

Eric Lamon Sternberg Cabal came into this life the first day of September 1980 and passed the first day of Winter 2021. He was born in Puerto Rico to his proud, though inexperienced, loving parents, Reyna and Tim. After 2 years of idyllic island... View Obituary & Service Information

The family of Eric Sternberg created this Life Tributes page to make it easy to share your memories.

Send flowers to the Sternberg family.