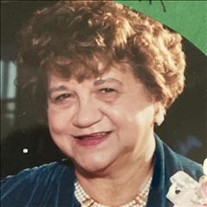 Eunice Natalie Waters Debrowsky died peacefully in her sleep on Sept. 13, 2021 at age 87, four days shy of her 88thbirthday, in Jacksonville, Fla. She was born in Providence, R.I. on Sept. 17, 1933 to Louise (Judge) and Bion Leathers. Known as Eunice growing up, she used her middle name, Natalie, as an adult. She graduated from Cranston (R.I.) High School in 1951 where she was a member of the marching band as a flutist and played piano at school events. She attended the University of Illinois where she met her first husband, James Waters. They moved to Sioux City, Iowa, where they owned a radio station and re-created the sounds of baseball games for live broadcast. They later moved to St. Louis where Natalie worked in advertising at the ABC-TV affiliate. She later worked for many years as a legal secretary. Natalie moved to St. Petersburg, Fla., in the 1990s where she met her second husband, Todd Debrowsky. Natalie lost her beloved father when she was just 10 to a train accident. She selflessly cared for others most of her life, first her younger brother, Albert, who became paralyzed when she was 20, and then devoted her life to providing for her three daughters. She was a hard worker and loving mother and sister. As she wrote to her children as they became mothers, "You will become a happier, more compassionate woman because you have the miracle in your hands to shape a young life." And that she did � from teaching her daughters the importance of "women's liberation" in the �70s to advocating for oneself; always our cheerleader, no matter what the circumstance. On the lighter side, Natalie shared her love of music with her children and grandchildren, particularly at The Muny outdoor theatre in St. Louis. One of her "claims to fame" included a phone call from popular actor and singer Robert Goulet after sending a letter just before his appearance at The Muny in 1981. It's not every day that your middle daughter yells, "Mom, Robert Goulet is on the phone!" With a gentle sense of humor, Natalie kept her family in stitches, especially during wild "Pit" card games and chasing sunsets over the ocean. Natalie was predeceased by her parents, brother, and daughter Julia. She is survived by her husband, daughters JanWaters (Keith Ostermeyer) and Toni Woods (Mark), and granddaughters Marin, Jadyn and Mia. A service at Hanna Park overlooking the ocean in Jacksonville will be held later in the year. In lieu of flowers, donations may be made to the Cypress Village CNA Christmas Fund, 4600 Middleton Park Circle E., Jacksonville, FL 32224 or to the Alzheimer'sAssociation at www.alz.org .

Eunice Natalie Waters Debrowsky died peacefully in her sleep on Sept. 13, 2021 at age 87, four days shy of her 88thbirthday, in Jacksonville, Fla. She was born in Providence, R.I. on Sept. 17, 1933 to Louise (Judge) and Bion Leathers. Known... View Obituary & Service Information

The family of Eunice N Waters created this Life Tributes page to make it easy to share your memories.

Send flowers to the Waters family.