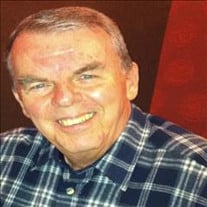 George Louis Warren, Jr., age 78, died peacefully in Jacksonville, FL on Tuesday, January 5, 2021 after complications from heart failure. George was known for his big personality, corny humor, giant bear hugs, and long, entertaining stories, which he loved to repeat. He was a ladies' man, fast foodie, world traveler, scuba diver, supreme soccer fan and referee, and a dad joke aficionado. George could be bold, brash, and at times opinionated. But those he loved, he loved fiercely. George was born in Mt. Carmel, IL on February 17, 1942. He was raised in East St. Louis, and later Belleville, IL by his parents, both teachers, Louise ( Merrill) and George L. Warren, Sr. As a teenager, he took great pride in his accomplishments on the basketball court, as the starting center of Belleville High School's basketball team. He was also a member of the distinguished Black Knights Drum and Bugle Corps, with whom he toured the country, from NYC to Miami and Chicago to Boston, for competitions. After graduation, George enlisted in the United States Navy. He was trained to be an electrician on the USS Ticonderoga, but he also lucked into a gig as the projectionist on the ship. Everyone loves and respects the movie buff on board, especially when he got to select which films the crew would get to see. This role afforded him special privileges in port to snag the hottest flicks. During his time in the Navy, George traveled to Guam, Japan, the Philippines, Bangkok, Hawaii, Hong Kong, Melbourne, Sydney, and off the coast of Cuba during the Cuban Missile Crisis. He was very proud of his service to his country. In the 1960s, following his time in the Navy, George joined the Chicago Police Department as a motorcycle officer in the 17th Precinct. He was active on the force during a tumultuous time in Chicago's and America's history. He always spoke fondly of his time with CPD (at least, in the stories that were suitable for children). He found a deep love for the city that stayed with him until the end, as evidenced by his Blackhawks jerseys and his prized replica Cubs World Series ring. (His daughters, loyal to Cardinal Nation, long rejected this ring and have now bequeathed it to George's Cubs-loving son-in-law, Jay.) After his time in Chicago, George moved back home to the metro St. Louis area and started a family. He was blessed with two equally headstrong daughters who refused to let him win an argument and were gifted with his piercing blue eyes. In St. Louis and Belleville, George forged a great life and built many close friendships. George took fashion cues from no one. In his youth, that meant sporting leisure suits with oversized collars and white patent leather loafers. In his later years, his signature look consisted of a pair of unfaded jeans from the high-fashion establishment known as Sears & Roebuck (what exactly was that shade of blue called?), New Balance "Dad" shoes, and likely a T-shirt supporting his youngest daughter's soccer team. (His baritone register ensured that he was always the loudest parent at any of her matches). Stubborn until the end, George of course waited until he was surrounded by his loved ones to concede to illness and depart this world to be welcomed into the Kingdom of Heaven. To paraphrase one of George's idols, he lived a life that's full. He traveled each and every highway, and often explored many of its exits and on ramps. And more, much more than this, he did it his way. Sinatra would be proud. He is survived by his daughters Mary Kathleen (Jeff) Sutton and Dr. Caroline Warren (Jay Schaldecker), and by his older brother, Dr. Harold Harding. He also leaves behind two grandchildren Spencer (15) and Gwen Sutton (6). George took great pride in both of his grandchildren, as evidenced by his bragging to anyone who would give him a split second. The stories never stopped. He also doted on his "grandpuppies" Oliver (9) and Lisa Left-Eye (1). George leaves behind many longtime friends from around the globe. He will be remembered as a loving father and grandfather, a loyal friend, a great hugger, a former police officer, a master scuba diver, an avid motorcyclist, a man of Catholic faith, a proud patriot and a US Navy veteran. And his family will smile at the thought of the man who invented dad jokes, the dad bod, and yes, dad fashion. A "Celebration of Life" and burial services will be delayed until the spring/summer, when (hopefully) it is safer to travel and no one has to stand in the Illinois snow. Services will be at Lake View Memorial Gardens, in the Masonic Garden. Lake View Funeral Home, 5000 N Illinois St, Fairview Heights, IL 62208 (618) 233-7200 www.dignitymemorial.com Full details to follow at a later date. In lieu of flowers, the family encourages donations or tributes to the American Heart Association at www.heart.org "Letting Go" The angels gathered near your side So very close to you For they knew the pain and suffering That you were going through I thought about so many things As I held tightly to your hand Oh, how I wished that you were strong And happy once again But your eyes were looking homeward To the place beyond the sky Where Jesus held His outstretched arms It was time to say goodbye I struggled with my selfish thoughts For I wanted you to stay So we could walk and talk again Like we did... just yesterday But Jesus knew the answer And I knew you loved Him so So I gave you life's greatest gift The gift of letting go -Judith Bullock Morse Local arrangements entrusted to Naugle Schnauss Funeral Home, 808 Margaret Street, Jacksonville, Florida 32204, 904-683-9288

The family of George Louis Warren, Jr created this Life Tributes page to make it easy to share your memories.

Send flowers to the Warren family.