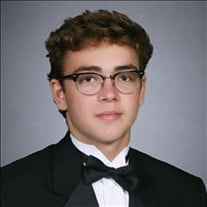 Jack Hamilton Wheeler (Jacky Chan, Jack BeBe), 18, of Julington Creek, Florida, passed away on December 22, 2019. Jack was born on September 11, 2001 in Jacksonville, and is son to Winslow Ballenger Wheeler and Cathleen Schmitt Wheeler; baby brother to Winslow Nathaniel Wheeler (Nate) and Owen Colgan Wheeler; Grandson to John David (Jack) and Loretta Schmitt and Winslow’s parents, Winslow Temple Wheeler and Judith Bevan Wheeler, and Nancy Hammill Wheeler; Great Grandson to Lila Bevan; Nephew to John David Schmitt III and Lissa Schmitt and Matthew Mailler Wheeler. Jack came into this world on 9/11; a day that was dark and broken for the entire world, yet despite the devastation and tragedy of that day, God gave us Jack to shine a light filled with joy, love and laughter. Jack was talented not only academically, but also was athletically and musically inclined. He attended Julington Creek Elementary, Fruit Cove Middle School and was a Senior at Creekside High School where he forged friendships with classmates, parents, teachers, administrators and coaches. He spent his childhood years playing sports in the community and video games with his friends and brothers, Nate and Owen. He amazed us with his baseball, football, basketball, and lacrosse talent. While small in stature, he could hit and field a baseball with might, run a football down the field fast as lightening, juke an opponent with the ease of a Barry Sanders, and in his head must have been thinking “catch me if you can”...On the court, he was quick and low and could handle the ball with a grace that made you wish to be young again and possessed a competitive spirit that made him seem unstoppable. On the lacrosse field, he brought that same speed and fight that made him a dangerous opponent and oh so fun to watch! Jack also taught himself to play the piano, a hidden talent not shared with many, but no less impressive than his athletic ability. Jack’s greatest talent however was his ability to make people smile and laugh. He was a humble kid that despite the accolades and compliments cast upon him, did not bask in those moments, but in the ones that made you bend over clutching your gut from laughter. That is the Jacky Chan that we will all miss the most…the nostril flaring, breath taking, loud, uncontrollable squealing laughter. The entire world shook on the day he entered it and this community’s world was shattered on the day he left it. The Wheeler family would like to thank their family, friends and the entire Julington Creek community for their outpouring of love and support, but would mostly like to thank our Lord and Savior, Jesus Christ, for blessing us with 18 years with our precious child. Until we see you again in heaven, rest easy Jacky. Arrangements by Naugle Funeral Home and Cremation Services, 1203 Hendricks Avenue, Jacksonville, Florida 32207

The family of Jack Hamilton Wheeler created this Life Tributes page to make it easy to share your memories.

Send flowers to the Wheeler family.