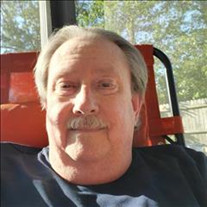 Jeffrey (Jeff) Edward Olson, 68, passed away peacefully on June 7, 2022 at Baptist Medical Center after an unexpected illness. He was greeted in heaven by his infant daughter Jamie, his mother, Betty Cooley-Olson, father, Robert Olson, brother and sisters Robert, Joanne and Sue. He is survived by his daughter, Rachael Crosby, ex-wife, Belinda Olson, granddaughter and grandsons Jaslynn, Dennis and Jaden, and several nieces and nephews. Jeff was born and raised in Racine, Wisconsin. After high school, Jeff joined the Navy where he spent time in Rota, Spain. The place he called home while in the Navy was aboard the USS Forrestal. Jeff was proud to have been a part of an Antisubmarine Helicopter Squadron conducting search and rescue. After his duties in the Navy were fulfilled, Jeff and his family settled in Jacksonville, FL where he spent most of his adult life. Jeff worked as Quality Control Supervisor with a number of large Jacksonville companies before finally retiring. Jeff was an enormous music lover, singer and avid guitar player. His charismatic personality, positivity, compassion and faith gave Jeff the ability to help others in their time of need. He was involved in numerous support groups where he donated much of his time. Jeff maintained contact with family and many old friends through some of the groups he was involved with. He has left behind many friends and family members who will surely miss him and his big hugs. Our hearts mourn the loss of this very special man. A celebration of his life will be held at the Jacksonville National Cemetery, 4083 Lannie Rd, Jacksonville, FL 32218 to be announced at a later date.

The family of Jeffrey Olson created this Life Tributes page to make it easy to share your memories.

Send flowers in honor of Jeffrey.