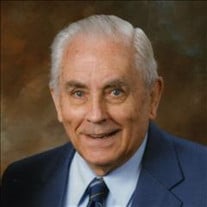 John Spruance Park, age 96, went home to be with his Heavenly Father on January 7. He was born on April 23, 1924 to Edna Jones Park and Eugene Lunt Park in Los Angeles, California. He lived most of his youth in the Philadelphia, PA area. He graduated from the United Stated Naval Academy (Class of 1948), and was commissioned an Ensign in the U.S. Navy. He served on active duty as a Supply Corps Officer for five years. He then continued to serve in the Navy Reserve while working full time for General Electric. "Jack" married Emma James Douthat on October 7, 1950. He was recalled to active duty in 1952 due to the Korean War and was stationed in New London, Connecticut on the Submarine Tender USS Taconic. In 1954 Jack returned to General Electric for their Management Training Program. He chose Sales in the Lamp and Photographic Lighting Department, and the family lived in Southampton, PA where Jack was one of three governing Township Supervisors. Jack was eventually transferred by General Electric to New York City. He and his family resided in Edison, NJ for 23 of his 33 years with the company. He was president of the New York Chapter of the U.S. Naval Academy Alumni Association. Jack retired in 1983 and moved with Emma to Ocean City, NJ. Attending USNA Homecoming events and football games continued to be highlights for them each year. Jack especially enjoyed the beach, boardwalk, baseball, books, and playing bridge. He was a Red Cross volunteer for many years and served on the American Red Cross Board in Cape May County, NJ. He was a Trustee and a member of the Ocean City Museum Board, and a volunteer for the Ocean City Pops Orchestra. Since September 2005, Jack and Emma have been residents of Fleet Landing Retirement Community in Atlantic Beach, FL. Jack is predeceased by his loving son John S. Park, Jr. Survivors are his wife of 70 years, Emma D. Park; son Stephen J. Park (Kay); son Richard B. Park (Elizabeth Copley); Daughter-in-Law Pamela H. Park; 4 grandchildren, Daniel (Pretty), Margaret, Stephen Jr. (Kelly), and Lauren; and 2 great grandchildren. A memorial service will be held at a later date. In lieu of flowers, Jack had asked that donations be made to the Leukemia and Lymphoma Society, an organization that the John Park Jr family dedicated many hours to over the course of many years.

John Spruance Park, age 96, went home to be with his Heavenly Father on January 7. He was born on April 23, 1924 to Edna Jones Park and Eugene Lunt Park in Los Angeles, California. He lived most of his youth in the Philadelphia, PA area.... View Obituary & Service Information

The family of John Spruance Park created this Life Tributes page to make it easy to share your memories.

John Spruance Park, age 96, went home to be with his Heavenly...

Send flowers to the Park family.