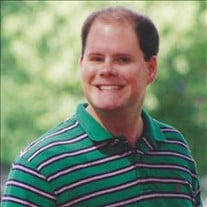 John Foster Shepherd went home to Heaven on October 18, 2020. John was born on January 22, 1972 in Jacksonville, Florida. He graduated from Episcopal High School and earned a Restaurant Management degree from FSCJ Culinary School. John started his business career managing several Woody's restaurants in Melbourne where he met Lori O'Beirne, the love of his life. He later moved back to Jacksonville where he worked with his dad as Vice President of Jacksonville Warehouse Companies. He later became a partner in Scott Water Proofing Company, a commercial roofing company. John was blessed to have so many close friends. They would converge on his house ready for him to cook on his Big Green Egg, swim and watch the Florida State Seminoles play football. He was the ultimate outdoorsman. One of his great loves was bird hunting in South America with his dad. He became an expert shot while hunting for dove over many years. He was also a regular hunter at the Thomas Brothers farms in Suwanee County. Another family highlight was regular trips to Fort George Island on his boat with his family and friends. Two days before his illness they spent a long beautiful day at Fort George. One of the things he always looked forward to was trips to the Middleton farm in South Georgia with his family and close friends. All the activities of the day ending in a huge bon fire at night. He was an avid fisherman. He looked forward all year to his annual trip to the Gulf with two close friends where they would catch and release over 200 fish each day. Family was a priority to John. His favorite holiday was Thanksgiving at his Mom and Dad's house. The house was full with Lori and his three children, and his sisters and their 5 children. He loved the stuffing, his Mom's special gravy and of course the turkey cooked on the Big Green Egg. John, Lori and the children loved Walt Disney World. They went all the time and never ever got tired of it. He was always the first on rides! John is survived by Lori, his soul mate and wife of 18 years, his three children whom he adored; Ella, Lily and Dylan, and his parents Garnet and Foster Shepherd. He also has two sisters, Elizabeth Dean and Ashley (Zach) Elkins. He is also survived by his mother in law, Darleen Rose Donnan, his sister in law, Cindy O'Beirne and brother in laws, Randy O'Beirne and Kyle Crawford and his 10 nieces and nephews. Due to Covid 19 there will be a private family celebration to celebrate John's life. In lieu of flowers the family would request a donation to First Coast Women's Services, 11215 San Jose Boulevard, Jacksonville, Florida. This is an organization that is special to John and his family. Arrangements are being made by Naugle Funeral Services (Nauglefuneral.com)

The family of John Shepherd created this Life Tributes page to make it easy to share your memories.

Send flowers to the Shepherd family.