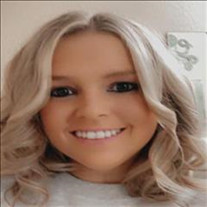 Kelly Lynn Santos (Hysler) passed away March 24, 2022, after a catastrophic brain aneurysm/stroke with her husband Justin David Santos, parents Kevin M Hysler and Angelique S Hysler and brother Michael K Hysler by her side. She is also survived by her grandmother in law Lucy Santos and mother in law Felicia Blachly. Kelly Lynn was born on October 11, 1987, in St Louis, Missouri. Moved to Naples Florida in 1989, She attended Lely Highschool and graduated from The Florida State University in 2010 with a degree in Business Management and Marketing. Kelly started her career at Merrill Lynch in 2010 as a customer service rep and moved her way up to Trust Officer While in College she met her soulmate, Justin Santos and they made a commitment to each other to be husband and wife on May 2, 2015, they shared everything from that point on -- traveling the world while caring for their three furry companions, Porkchop, Kahlua Beans and Charlie. Kelly was such a light and will be deeply missed by all who knew her. If there was one thing Kelly was, she was determined� No matter what her challenge or request, she gave her all to ensure she exceeded all expectations, whether it be planning her next trip with her husband, planting her garden, or taking pictures with her camera. Her Smile was infectious and brighten the room, she never met a stranger and always took the time to make you feel special. Kelly gave in death, as she gave in life. Kelly Lynn has ensured her legacy will live on through organ and tissue donation, while, Kelly leaves a huge hole in the hearts of her family and friends, through this generous decision, her heart will beat on ((garnet and gold) go Noles) she will touch countless others as the family members and friends and those who received her donated organs will be forever impacted by their improved quality of life. There will be a family celebration of Kelly's life later this spring In lieu of flowers, the Santos/Hysler family respectfully request contributions in her memory be made to LifeLink Legacy Fund. LifeLink Legacy fund is a non-profit organization which supports the mission and efforts in organ and tissue donation and transplantation. � LifeLink Foundation Donation Form | DonorPro Secure Site

The family of Kelly Lynn Santos created this Life Tributes page to make it easy to share your memories.

Customized sympathy cards. Mailed for you.