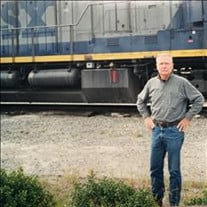 Larry Daniel Harrison (known as "Buddy" to family) went home peacefully to be with his Heavenly Father on November 28, 2020, at the age of 79. He was born on November 21, 1941 in Jacksonville, FL to Eugene and Dora Harrison. After an adventurous childhood to include rodeo and working on his dad's rental houses and other various projects, Larry graduated from Baldwin High School in 1959. In 1963, he married the love of his life, Connie Hendry. That was a busy week for him for four days later he started his 39-year career with the Atlantic Coast Line Railroad, a predecessor of today's CSX. A real jack of all trades, his skills and hobbies were numerous. He enjoyed farming, horses, NASCAR, rodeo, and investing in real estate. He went on some long-distance hunting trips to Colorado with his friends searching for elk and other big game. He also enjoyed hunting locally around northeast Florida and Georgia. He kept a ten-point buck mounted in his home along with dozens of horns on the barn walls. He was an avid fisherman, owning many boats and gear throughout his life including a 200-crab trap operation on the St. Johns river. All throughout his life he was no stranger to hard work. While holding down his full-time job as a freight conductor with the railroad he also found the time, strength, and energy to operate a working poultry farm with up to 30,000 chickens on site at any given time. He purchased the farm, located in Clay Hill, in 1973, building their family home soon after arriving. He raised three sons there and enjoyed seeing all of their sporting events and various 4-H activities. More recently, Larry had many CSX retiree friends and always enjoyed talking to them about the railroad. He took great pride and enjoyment in his children and grandchildren. He never met an enemy and always had a welcoming smile for everyone he met. Larry is survived by his wife of 57 years, Connie Harrison, of Jacksonville, FL; his sister, Norma Jean Bell; sons: Larry Harrison, Jr. (Diana), Michael Harrison (Nancy), and Chad Harrison (Erin); along with seven grandchildren: Grant, Jack, Rose, Ruby, Rainie, Emily, and Hailey. He was preceded in death by his three sisters: Eloise Touchton, Lois Reynolds, and Linda Bell. A celebration of life memorial service will be held on Friday, December 4th. Visitation will begin at 1:30 with the service beginning at 2:00 pm at Trinity Baptist Church, 800 Hammond Blvd (North Entrance) Jacksonville, FL. Local arrangements entrusted to Naugle Schnauss Funeral Home, 808 Margaret Street, Jacksonville, Florida 32204, 904-683-9288.

Larry Daniel Harrison (known as "Buddy" to family) went home peacefully to be with his Heavenly Father on November 28, 2020, at the age of 79. He was born on November 21, 1941 in Jacksonville, FL to Eugene and Dora Harrison. After an adventurous... View Obituary & Service Information

The family of Larry D Harrison created this Life Tributes page to make it easy to share your memories.

Send flowers to the Harrison family.