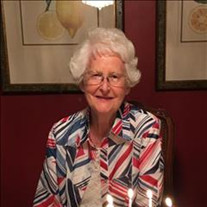 Lenore Gwendolyn (Oliver) Adams, 94, passed away on Thursday, June 9, 2022. Lenore was born on October 1, 1927, in Jacksonville, Florida to W.C. and Evelyn Rivers. She grew up on the Westside and attended Lackawana Elementary, John Gorrie Junior High and Lee High School. She was musically gifted and began playing the piano at the young age of 12 for her Sunday school class at Woodlawn Baptist Church. Following graduation, she pursued a double major in music and art at Wesleyan College in Macon, Georgia. "Sandy" as she was known for her hair, came home from college to marry Thornton Oliver, also a member at Woodlawn Baptist Church. The couple was active in the church and raised their two children, Julie and Charles, surrounded by the love and friendships formed at Woodlawn. Thornton and Sandy owned several shrimp boats and worked full-time together in the business and in the music ministry at church. Thornton was the music minister until his death in 1984 and Sandy played the piano and organ for 40 continuous years at Woodlawn. Following her marriage to Hal Adams, Sandy moved to Ava, Missouri where she continued to be active in church by playing the organ and piano and sewing beautiful banners for seasonal display. She immersed herself in the small community forming great friendships and participating with the public library committee to select books for purchase. Sandy lived a long, happy life always surrounded by her loving family and many friends. Her life was an example of a Proverbs 31 woman and she exemplified kindness, service, and gracious hospitality. She often quoted her mother saying, "Pretty is as pretty does." Sandy was known by everyone she met to be just as beautiful inside as she was outside. She was never idle and her hands were rarely still as she was always knitting, quilting, sewing, crafting, oil painting, completing crosswords, or cooking in the kitchen. She knew her way around the kitchen, especially when cooking fried shrimp! Her home was always open and she hosted many dinners, choir parties and visiting ministers and their families. Sandy had a unique flair for making everyone feel welcome and cherished. She was a loving and devoted mother to two children, Julie Oliver and Charles (Debbie) Oliver, and one stepchild, Halle (Gina) Adams. She was a beloved "Gahme" to 5 grandchildren - Laura, Trey, Julianna, Grant (Victoria) and Meghan and one great-grandchild - Charlotte. All of these she loved and touched deeply. She lived a lifetime of love and laughter. Sandy will be dearly missed and always remembered. Please join us as we celebrate her life and legacy on Tuesday, June 14 at Naugle Funeral Home on Hendricks Avenue in Jacksonville. Visitation and viewing will be at 10:00 a.m., followed by the memorial service at 11:00 a.m. officiated by Pastor Tommy Carr. Internment will follow at Riverside Memorial Park.

Lenore Gwendolyn (Oliver) Adams, 94, passed away on Thursday, June 9, 2022. Lenore was born on October 1, 1927, in Jacksonville, Florida to W.C. and Evelyn Rivers. She grew up on the Westside and attended Lackawana Elementary, John Gorrie Junior... View Obituary & Service Information

The family of Lenore Gwendolyn Oliver-Adams created this Life Tributes page to make it easy to share your memories.

Send flowers to the Oliver-Adams family.