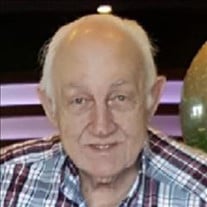 On Friday, May 21, 2021, Leonard Earl Howard, loving father, grandfather, great-grandfather, and friend, passed away at the age of 77. Leonard was born to Mr. and Mrs. Earl Howard on July 19, 1943, in Springfield, Illinois. At the age of 18, Leonard enlisted in the U.S. Navy, where he served his country for 30 years. Over his years of service Leonard earned many awards and accolades, including the Navy Expeditionary Medal, Vietnam Service Medal, Vietnam Campaign Medal, National Defense Medal, a Fifth Good Conduct Order, and a Bronze Star. Leonard was a key member of many intensive combat operations and special ops and received the Meritorious Unit Commendation for his service in keeping with the highest traditions of the United States Navy and serving the country commendably during times of war. Leonard also served his country by educating others in the U.S. Navy on cold weather operations and nuclear weapons loading. Leonard was dedicated to protecting the lives of others outside of his military service. While stationed in Barcelona, Spain, Leonard was recognized for saving the lives of a woman and her baby by pushing the baby's carriage out of the way of a speeding vehicle. Though he and the mother were hit by the vehicle, they suffered only minor injuries and the baby was not harmed. Leonard retired from the Navy in 1990. He wore many hats following his military service, including working in commercial electric, captaining a commercial fishing and shrimping boat, and driving a long-haul semi-truck delivering goods across the United States. After years of working and traveling, Leonard settled down at home in Illinois to work at a local country store and take care of his wife, Patty. Following her death in June 2017, Leonard moved to Florida to spend his remaining years with his daughters and their families. Leonard loved to spend time outdoors fishing and hunting with his family and friends. He will be remembered as a loving father, grandfather, and friend who was dedicated to his family and his country. Leonard is preceded in death by his wife, Patricia Pauline Howard. He is survived by his sister, Jeanatte Mead and husband Mike; his children, Shelia Grant and husband Erik, Sonya Howard and partner Kenneth; his step-children, Karen, Sharon, Richard, and David Lomelino; his grandchildren, Eric Burney and wife Jessica, Marques Burney, Amanda Avery and husband Jesse, Austin Avery and wife Ashley, Hayden Grant, Jarrett Sandifer, and Jason; and his great-grandchildren, Hendry, Deacon, Elijah, Josiah, and Konner. Leonard will be laid to rest in Divernon, Illinois on Friday, June 18, 2021 at Bramley Funeral Home 10:00-11:00 am, with full military honors ceremony to follow at Brush Creek Cemetery. The family would like to thank everyone near and far for their thoughts and prayers and invite anyone wishing to pay their respects to attend Leonard's going home celebration. Afterglow I'd like the memory of me to be a happy one, I'd like to leave an afterglow of smiles when life is done. I'd like to leave an echo whispering softly down the ways, of happy times and laughing times and bring and sunny days. I'd like the tears of those who grieve, to dry before the sun of happy memories that I leave behind when day is done.

On Friday, May 21, 2021, Leonard Earl Howard, loving father, grandfather, great-grandfather, and friend, passed away at the age of 77. Leonard was born to Mr. and Mrs. Earl Howard on July 19, 1943, in Springfield, Illinois. At the age of 18,... View Obituary & Service Information

The family of Leonard Earl Howard created this Life Tributes page to make it easy to share your memories.

Send flowers to the Howard family.