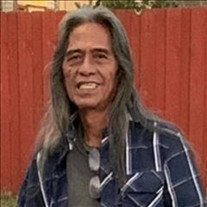 Loreto "Larry" "Etot" Centeno, of Jacksonville, Florida, passed away, Friday, November 19, 2021, surrounded by his loving children. A Celebration of Life Service will be held on Sunday, December 12th at 4:30 PM in Filipino Family Gathering International Ministry, 7310 Collins Rd., Jacksonville, FL 32244; his brother, Reverend Eddie Centeno, will be officiating. Loreto was born December 13, 1953, in Manila, Philippines, to Cecilio and Felicidad Centeno. He migrated to the United States in 1983 and has stayed in Jacksonville, Florida, ever since. Loreto worked at Naval Station as a Bar Supervisor and Cook. After that, he spent 30 years working for the School Board as Leas Custodian, starting at Ed White High School and finishing out his years at Timucuan Elementary School until he retired in July of 2016. Throughout those years, he built an amazing friendship with his colleagues and with every student he came across with. A very joyful man, Loreto loves to tell stories from his experiences from the Philippines and here in the US, stories that will truly captivate you and will never fail to bring a smile to your face and leave you with a heart full of laughter. Loreto will be the first to say he is not a perfect man; he made some decisions in his life that he may not be proud of, but for those who knew him well, his imperfection is overshadowed by his love for his family and friends. For them, he was simply the most caring man, willing to help anyone in need, even to the point of putting others' needs before his own. Loreto is survived by his sister Vicky, his brothers; Conrado, Cecilio Jr., and Eduardo, his children Tina (Teon), Vicky and Nicky; his stepchildren Shanda and Anthony; his six grandchildren; Malaki, Elijah, Teona, Mariyah, Maliyah, and Zendaya; his step-grandchildren Victor, Miranda, Lauren, Antonio; his nieces; Cheryl, Rosemarie, Lisa, Abigail and Danielle; his nephews; Conrad Jr., Reynaldo Jr., Ryan, Brandon, Chris, and Robert. His father, Cecilio, his mother, Felicidad, his brothers Manny, Reynaldo, and the love of his life, Becky and Gloria, preceded him in death. Twelve hours before his passing, Loreto accepted the Lord Jesus Christ as His Lord and Savior! Because of this, we are certain that he is now in the loving and merciful arms of the Lord and will celebrate Christmas in the presence of the One True King, Jesus Christ! We love you, Dad! Now, there will be no more pain and sickness for you, for you are now fully restored and received the greatest healing of all in the presence of our Lord. It will never be goodbyes' only see you soon for we know that in Jesus Christ we are guaranteed to be all reunited again in eternity. "I write these things to you who believe in the name of the Son of God so that you may know that you have eternal life" (1 John 5:13)

The family of Larry created this Life Tributes page to make it easy to share your memories.

Send flowers to the Centeno family.