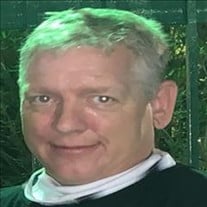 Louis C. Gerry (Lou), 47, Jacksonville, FL passed away suddenly at home on 4/20/21, following a routine surgery. Lou was born on March 7, 1974 in Akron Ohio and lived in Ohio until he moved to Jacksonville, Florida several years ago to look for work and get out of those cold winters up north. Lou is survived by his wife, Fawn R. Gerry, his Mother, Ranelle T Gerry (Louis, d.2006), his father in law, Louis M. Zemanek Sr. (Helen, d.2016), one sister, Julia Mintzer (Rob), one sister in law, Doris B Chmelar (Paul), a brother in law, Louis M. Zemanek Jr. (Colleen), his 4 children, Nicholas Isenhart Sr of Akron Ohio, Geana Gerry of Rootstown Ohio, Justin Gerry and Haley Dutton both of Jacksonville and his grandchildren, Liam, Makenna and Nicholas Isenhart Jr of Akron Ohio, plus several aunts, uncles and cousins, as well as countless friends, all of whom he cherished greatly. Lou was an electrician by trade and worked at D.L. Williams Electric Co Inc. He will be remembered mostly for his extraordinary sense of humor, his tenacious smile and his contagious laughter. He touched many, many lives and will be missed by everyone who knew him. He was the most amazing husband and loving father anyone could ask for and he touched many, many lives. Lou loved music and seemed to know every song written as he could name almost all of them within a few bars of being played. He loved sports, mainly football and was an avid Pittsburg Steelers fan, but his greatest love was his family and friends, and spending time together making memories he wanted to last a lifetime. A memorial service is being held on Saturday May 1, 2021 at 11:30am-12:00pm at Naugle Funeral Home located at 1203 Hendricks Avenue, Jacksonville, FL 32218 and a reception immediately following his memorial service at the home of his Father in Law at 8427 Brierwood Rd., Jacksonville, FL 32217.

Louis C. Gerry (Lou), 47, Jacksonville, FL passed away suddenly at home on 4/20/21, following a routine surgery. Lou was born on March 7, 1974 in Akron Ohio and lived in Ohio until he moved to Jacksonville, Florida several years ago to look... View Obituary & Service Information

The family of Louis Gerry created this Life Tributes page to make it easy to share your memories.

Send flowers to the Gerry family.