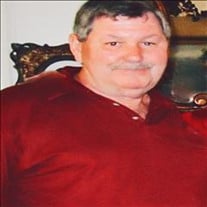 Malcolm "Mac" Frank Noble, born October 1st, 1943 (77) of Jacksonville, Florida, passed away suddenly on the 16th of December as a result of pneumonia while recovering from a long battle with Covid-19. In his life, he was a Boilermaker and member of The International Brotherhood of Boilermakers, Iron Ship Builders, Blacksmiths, Forgers and Helpers, member of The National Brotherhood of Electricians, and driver for Mid Florida Hauling. He is survived by his former spouse Marilyn L. Noble, sons Joseph M. Noble and Vaughn T. Winfree, brothers Clarence Noble and Teddy Cox, sister Eilene Edwards, and his loving dog and friend, Frank. He is laid to rest this day of the 19th of December 2020, at Riverside Memorial Park. He was a man of faith, of principle, and a father to be proud of. His like shall not be seen again soon, for there is only one �Mac'. He will be deeply missed. But that is not the whole story of Mac Noble, and truthfully, there is not enough parchment or time to convey to you the man that he was. Suffice it to say that he was a man of stubborn conviction, often to the point of argument. But he never held a grudge long. He was a man who was fiercely proud of his sons and their accomplishments, and never tried to hold back or overshadow them. He was a man of faith who loved God, but one who learned that faith through hard life lessons and experience. He loved his brothers and his sisters, and he cherished every memory of them. He was a man who, though divorced, maintained a lasting friendship with his former spouse Marilyn Noble that defied normalcy, but provided a bedrock foundation for his son Joseph while growing into adulthood. Yet still that is not the whole of him. He was a man who loved nothing more than to learn and speak about naval history and the Battle of Midway, except perhaps to tell you about how the Gators played last week. A man whose "5-minute phone call" would inevitably turn into an hour and a half until you realized where the time went. A man who could speak to his dog, Frank, as if he were another person in the room; and whose dog seemed to understand him right back. He was a man who displayed a rough exterior at times but, in reality, was a sentimental softy who valued every kind word and action. He tithed with his church, First Baptist of Jacksonville, without fail or falter. He gave to charities, not the least of which St. Jude's, and always hoped he had made an impact. His sense of humor was unique and endearing; he attached a toilet seat to an old run-down car and named it "Road Commode" in his younger days. When he suffered loss, he felt it deeply, such as with his son Joshua. But he was never truly broken. He showed a steadfast and resilient strength that could be drawn on by those who loved him and who love him still. He provided more of an example of how to be a Man than he could ever truly know. Perhaps the most difficult point to make is that it is impossible to say who he truly was in this moment. Those who knew him will know this completely. Yet it must be said again that his like shall not be seen again on this Earth soon. That he loved his family and was loved in turn. That he was a man who ended this life worthy of emulation for his strength and fighting spirit, and his fierce love for those close to him. He was a man who is undoubtedly now in the Kingdom of God, but who shall also live forever in the hearts and memories of those who knew him well. He was a beloved father, and a good and devout man, and there can truly be nothing better said than that. Until we meet again.

Malcolm "Mac" Frank Noble, born October 1st, 1943 (77) of Jacksonville, Florida, passed away suddenly on the 16th of December as a result of pneumonia while recovering from a long battle with Covid-19. In his life, he was a Boilermaker and member... View Obituary & Service Information

The family of Malcom F Noble created this Life Tributes page to make it easy to share your memories.

Send flowers to the Noble family.