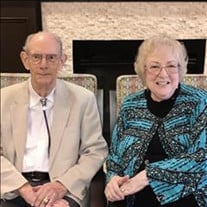 William Gardner Hicks (May 1, 1935 - March 23, 2020) and Margaret Anne Hicks (July 1, 1937 - April 1, 2020) On March 23, 2020, William (Bill) Hicks passed away at the age of 84 from the Coronavirus. His wife of nearly 60 years, Margaret Anne (Peggy) Hicks, died of Coronavirus at the age of 82 a few days later on April 1, 2020. Bill was born in Annapolis, Maryland on May 1, 1935 and graduated from the United States Coast Guard Academy in 1956. His military career spanned 21 years. Most notably, he served as sailing instructor aboard USCGC Eagle, Assistant Professor of Chemistry and Engineering at the USCG Academy, and Engineer aboard the USCGC Campbell. He earned his Masters degree from Rensselaer Polytechnic Institute in 1967. He was responsible for leading USCG operations for Coast Guard Squadron 3 during the height of the Vietnam War. Bill retired as Commander in 1977. Following retirement Bill held several engineering positions retiring from the former Centerior Energy Company of Cleveland in 1993. Bill was a man of strong faith who loved the Coast Guard, his family, a good joke and a good martini. Peggy was born in Oakland, California on July 1, 1937 and graduated from Stephens College with an Associates Degree in 1958. Peggy and Bill were married on June 9, 1962 in Yorktown, Virginia. Peggy was a proud homemaker and mother of three children. She was a supporter of the Red Cross who donated blood regularly, earning special recognition with an 8-Gallon Blood Donor Pin. She loved her jewelry, colorful clothes, shoes and handbags. She was crafty, loved to sew, and wrap beautiful packages at every holiday. She loved movies and was an avid Cleveland sports fan. Bill and Peggy moved to Florida in 2014. They are survived by their son Robert Fort Hicks and wife Lisa (Sesko) Hicks of Medina, Ohio; daughter Lila Jeanne (Hicks) Lynch and husband Todd Michael Lynch; and two grandchildren Erin Brianna Lynch and Sean Patrick Lynch of Saint Johns, Florida. They are preceded by their son David Brian Hicks. Funeral services will be held at Arlington National Cemetery at a future date to be determined. In lieu of flowers, gifts in memory of Bill and Peggy Hicks may be made online to the Baptist Health Foundation, COVID Relief Fund at �giving.baptistjax.com/give/278040/#!/donation/checkout . or mailed to ?Baptist Health Foundation, 841 Prudential Drive?, Suite 1300, Jacksonville, FL 32207. Please notate the gift for Baptist South. Local arrangements under the direction of Naugle Schnauss Funeral Home & Cremation Services, 808 Margaret Street, Jacksonville, Florida 32204, 904-683-9288

The family of Margaret Hicks created this Life Tributes page to make it easy to share your memories.