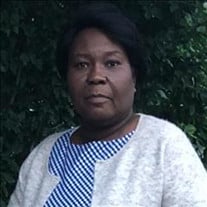 Marie Elvrine Guerrier (n�e Murat) was born on May 28,1964 in Tabarre, Haiti to Nadia Bernard Murat and Davius Murat. She had a sister and a brother. She left Haiti in 1980. She entered in Quebec, Canada then to arrive in Miami, Florida in the care of her aunt. Not familiar with the language or culture, she began to build her life in the United States with great hope of a better future for herself and family back home. She struggled to find a new church home not satisfied with what religion had to offer. Not long after, she was introduced to the Body of Christ and became a faithful member of the Lively Stone Church of Miami under the care of Pastor Woolly Doriscar. With Sister Nini and many others as her mentor, she grew in the Lord and became established in her faith in Christ. It was her that she met her husband and friend Renold Guerrier whom she married in February 19, 1984. Here she gave birth to her two children Rebecca Guerrier and Rhodeney Enoch Guerrier. In 1999, Marie Elvrine Guerrier moved with her family to Jacksonville, FL under the care of Elder Paul B. Dyal. Here her family grew in faith and love of the Body of Christ. She was a faithful servant and friend to those around her. She loved deeply and lived with much joy and passionate. She was always concerned of the needs of others. Though she spent her career as a certified nursing assistant, respiratory therapist, and school bus driver, her true vocation was in investing in the Lord and people. Her life was a preparation to one day meet her Savior. On June 21, 2021 at the age of 57, the Lord granted her rest from the long and hard battle with cancer. She said, "It is time, and I am ready to fly to Jesus." Death is not an end but another beginning for those in Christ. Her surviving family members include her husband, daughter, son, and two most loved grandchildren Angeline Elise and Arthur Emmanuel. Farewell until we meet again, beloved wife, mother, grandmother, sister and friend.

Marie Elvrine Guerrier (n&#65533;e Murat) was born on May 28,1964 in Tabarre, Haiti to Nadia Bernard Murat and Davius Murat. She had a sister and a brother. She left Haiti in 1980. She entered in Quebec, Canada then to arrive in Miami, Florida... View Obituary & Service Information

The family of Marie Elvrine Guerrier created this Life Tributes page to make it easy to share your memories.

Send flowers to the Guerrier family.