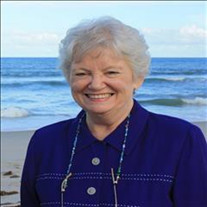 Mary Lou Arena obituary Mary Lou Arena passed away on Saturday, February 5th, 2022 at the age of 86. She went from being held by her daughter Janet and son-in-law Hal to being held by Jesus. Mom battled Parkinson's and Lewy-Body dementia for many years and is now happily at peace. I suppose she and dad are holding hands and catching up as they did so often. She is probably also giving one of her four brothers what for, just because. Mom was a Godly woman who spent much of her life ministering to others, especially women. She loved to teach others how to pray and study the Bible for themselves and led numerous groups and Sunday school classes over the years. She touched hundreds of lives in her lifetime. All three of us kids remember the many, many times we walked by and saw mom praying next to the armchair in the bedroom. Her daily time of Bible study and prayer were inviolate. She was a fearsome prayer warrior. We all said "You can get mom to pray but you'd better be ready for what God wants to do." When mom prayed, harmful friends moved out of state, ill-advised love interests lost interest, and bad actors inexplicably found themselves in worse circumstances. She loved our dad fiercely and they were often caught kissing in front of the kitchen window. The neighbors driving by would honk their horns, adding fuel to the fire. She loved my older brother, younger sister and me with actions. She allowed and encouraged us to explore our imaginations and play. The neighborhood kids all came to our house because messes were tolerated, trees were climbed, holes were dug, and mom was frequently in on it. This love and encouragement carried over to her grandchildren. She made up new games, took them to distant lands, shared her love of art, and taught them that imagination trumps reality. There was never much money growing up, but our house was still the hang-out house. Mom could turn a bag of popcorn and pitcher of tea into a party, a rolled-up magazine and some pieces of paper into the best party game ever (aka, the fruit game), and a hug and kind word into a commendation from the president. For all her goodness, mom was no stiff southern saint. She played games with us indoors and out, drove the car when we toilet papered houses, rolled us out of bed in the middle of the night to go shrimping, and encouraged Chinese Fire Drills. This included the time she drove off, claiming she didn't know we hadn't all jumped back into the car yet. While mom was a truly saintly person, there was one thing that revealed a competitive side, Aggravation. It was one of mom and dad's favorite board games. I'm pretty sure we learned to play it before we learned to read. Playing Aggravation with her brought out a cutthroat fiend who would gleefully send your marble back to base, talk smack, and chortle maniacally all the while. I suppose she was teaching us about life? It was always fun to watch her have fun. Mary Lou was preceded in death by her parents, Williamson & Verla Caldwell Kiser; her beloved husband, Thomas (Tom) Arena in 2017; 4 brothers Eugene (Virginia) Kiser, Sidney (Peggy and Barbara) Kiser, Michael (Rebecca) Kiser, Frankie (Alice and Mary) Kiser; 2 precious grandchildren Faith and Hope Arena; and many extended family members, and friends. She is survived by her children Thomas Michael (Valerie) Arena, James Alan (Debbie) Arena, and Janet (Harold) Sneden. She is remembered by her 9 grandchildren: Jonathan, Janni, Jarrett (Kelly), Jacquelyn, Anthony (Maddie), Michael (Abbey), Jay, Joe (Nikki) Sneden, and Jill (Sean) Onessimo; and 8 great-grandchildren: Owen, Gabe, Autumn, Connor, Wyatt, Adelyn, Harper and Judah James. She is also remembered by her sisters-in-law and loved friends Mrs. Jean Wagner (Jim) and Mrs. Terri Gross; a host of cousins, nieces, nephews, and caregivers that held a special place in her heart; and many who called her friend, teacher, or mentor. An un-payable debt of thanks to Janet and her long-suffering husband Hal for making mom's last years full of love and as much comfort as possible. A celebration of life will be held Saturday, March 5, 10 am at First Baptist Church, 124 W Ashley St, Jacksonville, FL 32202 (Dining Room). The memorial service is followed by a brief graveside service at Chapel Hills Memorial Gardens cemetery, 850 North St. Johns Bluff Rd, Jacksonville, FL 32225 (no funeral procession). In lieu of flowers, please consider making a donation to Voice For Christ Ministries, Nenana, Alaska (www.vfcm.org).

Mary Lou Arena obituary Mary Lou Arena passed away on Saturday, February 5th, 2022 at the age of 86. She went from being held by her daughter Janet and son-in-law Hal to being held by Jesus. Mom battled Parkinson's and Lewy-Body dementia for... View Obituary & Service Information

The family of Mary Lou Arena created this Life Tributes page to make it easy to share your memories.

Send flowers to the Arena family.