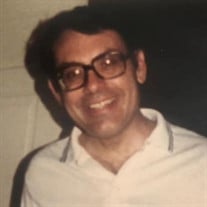 Michael (Mike, Dad, Papa, Uncle Mike) Vasileff, born in Lincoln, Nebraska, April 26, 1943, passed away peacefully May 7,2020, in Jacksonville, FL after a courageous battle with cancer. Mike grew up in Granite City, IL with his brother Tom. Mike attended school in Granite City until college where he attended St. Louis University. Mike loved learning and furthered his education at Xavier University. Mike had a variety of careers over his life but he was a born teacher and that was his first and last career passion. Mike was a generous and outgoing person and was loved by many, even those he met during the last chapter of his life. Mike’s other passion was being a father and grandfather to his children, grandchildren, great grand-children and step-grandchildren. Mike was a coach for all of his kids -- outdoor and indoor soccer, basketball, and softball. He encouraged all of his children to learn piano and guitar. Mike attended every dance recital, baseball game, football game, swim meet, award ceremony and graduation. Mike was a role model and father figure to his only grandchild and his three great grandchildren. Mike considered his kids and grand kids his biggest success. His children and grandchildren are eternally grateful for all he did for them over his life, including his graceful and dignified approach to his battle with cancer. Mike will always be remembered for his dad jokes, late night fast food runs for his kids and their friends, black socks, love of classical music and poetry, and the uncanny ability to know when his children needed a little extra love and support. He loved visiting his brother in Alaska and salmon fishing with his brother and sons. Mike is preceded by his parents Esther and Vasil and his beloved grandparents Baba and Dedo. He is survived by his children Ann, Sue (Wayne), John, and Billy (Lucy). Grandchild Rosie (Joe). Great-grandchildren Harper, Ben, and Graham. Brother Tom (Chris). Niece Emily (Tim) and their son Alexander. A private family service will be held Saturday, May 9, 2020 at Ponte Vedra Valley. In lieu of flowers, donations can be made in his honor to Community Hospice.

The family of Michael Vasileff created this Life Tributes page to make it easy to share your memories.

Send flowers to the Vasileff family.