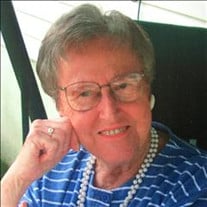 Lily Muriel Skow passed away August 16, 2021 at the age of 104 years old. She was cared for and died in the home of her daughter and son-in-law while under in-home Community Hospice care. She was of British descent but was born in Okak, Labrador June 15, 1917 to Moravian missionary parents. The family later served as missionaries to the West Indies. In the midst of that assignment she left and attended boarding school in England. During her school years her family moved to United States and settled in Nebraska. There her father attended an Episcopal seminary. While a high school student she met the love her life, Harvey Skow, and they married after he graduated from University of Nebraska as an electrical engineer. His career took them to California, Pennsylvania and lastly Jacksonville Florida. Family was very important to her, and she always provided a loving, peaceful environment for her children. While in Pennsylvania she was called to a prayer and healing ministry. Her primary prayer partner was Marcia Mitinger. They became affectionately known as the "M&M's. Their ministry together transformed many lives and subsequently continued for years in Pennsylvania and then the Jacksonville area. At the encouragement of her many friends she wrote a book entitled "From Pain to Peace" which is a guide to ministry for Christian prayer-counseling in physical & inner healing and deliverance. She never stopped serving the Lord. River House Healing Rooms of N FL honored her and also provided opportunities in her final years. Particularly notable - at 100 and 102 she participated in regional services where she powerfully prayed untiringly for hours as people lined up for prayer and blessings. She was involved with The Church of the Redeemer anglican and a member of a life group of ladies for close to 20 years. The last number of years she volunteered with "Seniors on a Mission" which also allowed her to continue to practically serve God in her later days. She is preceded in death by her husband Harvey Skow all her siblings Eric Asboe, Donald Asboe and Kathleen Brennan. She is survived by her son Richard (VIcki); a daughter Karen (Michael) Elin; and five grandchildren, Dennis, Zachary, Randy (deceased), Juliane and Eric. She also has two great grandchildren, Rali Toro and Thackery Skow. We believe 2 Timothy:4-8 is a fitting description of her life - "I have fought a good fight, I have finished my course. I have kept the faith: henceforth there is laid up for me a crown of righteousness, which the Lord, the righteous judge shall give me in that day:" A memorial service will be on September 18 2021 at 1:00 pm at church of the Redeemer Anglican 4815 Executive Park Court 32216 For further details see www.naugelfuneral.com In lieu of flowers donations can be made to Church of the Redeemer Anglican, Seniors on a Mission or River House of NFL Healing Rooms.

Lily Muriel Skow passed away August 16, 2021 at the age of 104 years old. She was cared for and died in the home of her daughter and son-in-law while under in-home Community Hospice care. She was of British descent but was born in Okak, Labrador... View Obituary & Service Information

The family of Muriel Skow created this Life Tributes page to make it easy to share your memories.

Send flowers to the Skow family.