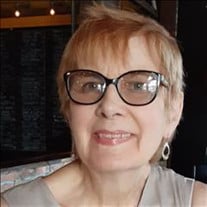 Nike Navor Chillemi, 71, passed away on June 9, 2021 at her home in Jacksonville, FL after a valiant fight against cancer. Born in Gary, Indiana to Helen and Emil Navor in 1949, the family later moved to Hopewell Junction, New York. Nike graduated from Roy C. Ketcham Senior High School in Wappingers Falls, New York in 1967. She earned an Associate of Arts in Fashion Buying and Merchandising from the Fashion Institute of Technology and then pursued a career in the bridal industry. She later completed her Bachelor of Science in General Studies at St. Joseph's College in Brooklyn, New York. She was a life-long learner, taking multiple courses in biblical and ministerial studies. In 1986, she married Joseph Chillemi and they resided in Brooklyn, New York. Together they enjoyed traveling with many Florida vacations which she immensely enjoyed. In 2015, she moved to Jacksonville. A lover of God's four-legged creatures, she volunteered at Retreat for Urban Animals for several years. At the time of her death she had four cats and her beloved Sophie, the wonder dog. She was a writer of cozy thrillers with a national security twist. Her motto was "Grace and Grit ~ I like my bad guys really bad and the good guys fighting for justice against steep odds." She published six romantic suspense, one young adult, and four historical novels. She was a member of American Christian Fiction Writers (ACFW) and active in online critique groups. Through Grace Filled Fiction, she reviewed, judged and promoted other Christian books. As an adult, Nike became a devoted follower of Jesus Christ as her Lord and Savior. She last attended Grace Life Church in Mandarin where she was bathed in prayer and found peace and joy worshipping in the presence of God. Nike is predeceased by her parents and her husband, Joseph. She is survived by her brother, Michael Navor (Laura) of Burnham, Maine, and three children Victoria, Alyssa and Delayne "Lavi" Chillemi of Brooklyn, New York. A memorial service will be held at Grace Life Church, 2960 Plummer Cove Road, Jacksonville, FL 32223 on Saturday, June 19, 2021, at 5:00 p.m. In lieu of flowers, donations may be made to Community Hospice of Northeast Florida, who were wonderful in their support through Nike's journey home.

Nike Navor Chillemi, 71, passed away on June 9, 2021 at her home in Jacksonville, FL after a valiant fight against cancer. Born in Gary, Indiana to Helen and Emil Navor in 1949, the family later moved to Hopewell Junction, New York. Nike... View Obituary & Service Information

The family of Nike Navor Chillemi created this Life Tributes page to make it easy to share your memories.

Send flowers to the Chillemi family.