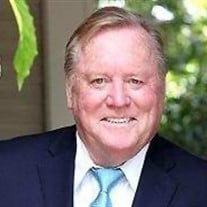 Patrick Thomas McGuinness, long time Jacksonville resident and well-known criminal defense attorney, passed away on Monday, March 22, 2021, after a long fight against a rare form of blood cancer. A second generation Irish American and one of seven boys and two girls, Pat and fraternal twin brother, Brian, were born in New York City on December 25, 1950, to Edward W. and Mary Moynihan McGuinness. The McGuinness family moved to Jacksonville when Pat was 13, where he attended Bishop Kenny High School from 1964-67. He played football at BK and was active in the BK Alumni Association. Pat's family moved back north, where Pat graduated from Stamford Catholic High School in Stamford, Connecticut in 1968. Pat earned a Business degree from the University of Connecticut and his law degree from the University of Miami School of law. Pat interned and was offered a job at a prestigious medical malpractice law firm but chose instead to go to work for the Public Defender's Office in Jacksonville in 1977. Pat started as a beginning defense attorney in County Court defending clients charged with misdemeanors, but quickly rose through the ranks to become one of the leading felony trial lawyers. Pat was then assigned to the newly created Special Defense (now Homicide) Division, which was responsible for all murder cases and especially complex cases that came through the office. Over the course of his career, Pat represented well over a hundred clients charged with murder, and many more in other serious felony cases. He left the Public Defender's Office in 2008 and began a private practice with Ann Finnell, Lara Nezami Vaghefi, and Gonzalo Andux. Before his illness, Pat was semi-retired, though occasionally called upon for the use of his investigative and trial skills. Pat's abilities as a criminal defense attorney received well deserved recognition after a French film crew decided to follow an American murder case from arrest to verdict. Because Pat and Ann Finnell had a case that was definitely going to trial, the film crew chose to follow their case, State v. Brenton Butler, without knowing what the outcome would be. Pat and Ann won an acquittal for a black teenager wrongfully charged with killing a white female tourist in an armed robbery, despite a positive identification by an eyewitness and a written confession. After the trial, Pat and Ann developed evidence as to the identity of the real perpetrator, who was then arrested and convicted. The end result was the Academy Award winning documentary of 2001. The film crew titled it "Murder on a Sunday Morning" at Pat's suggestion. Pat was already a frequent speaker at seminars in Florida, but, after release of the film, he became a sought after speaker nationwide, and even in other countries. The thoroughness of Pat's investigations and preparation became legendary. He was able to obtain the dismissal of a triple murder case by uncovering an alibi that the client didn't know he had. The case was 5 years old, and the crime occurred on a weekend, but Pat was able to document that the client had worked overtime and signed in and out of his job in Virginia on the same day the murders occurred in Jacksonville Beach. Pat achieved some notoriety as possibly the first lawyer in the country to successfully raise a battered spouse defense to a murder charge on behalf of a husband. Pat developed some expertise at exposing junk science in the courtroom, particularly in arson and child abuse cases. By showing that the fire was not arson or that the child had not been abused, he won cases by proving that no crime was committed. Some of these "expert" purveyors of junk science were known to withdraw from cases when they learned that Pat would be cross-examining them. Pat was known as an expert with experts. Pat's talents were not limited to the courtroom, however. He worked his way through college as a furniture mover, and used that acquired talent to assist countless friends and relatives when they needed to relocate from one residence to another (never for money, always for friendship). He was an avid chess player, voracious reader, and adept at keeping up with the latest developments in computer electronics. Pat may have over-rated himself in one respect: he considered himself a "do it yourself" handyman, which resulted in many of his residences appearing to be "works in progress." Pat is survived by his wife Alice Beardsley McGuinness after 39 years together, and his loving son and favorite person, Sean McGuinness. His surviving siblings include his brothers Bill and spouse Kathy of Pleasant Hill, Ca (children Matt, Brendan and Kelly),Neil and spouse Kathie of Atlantic Beach, FL (children Kevin, Luke and Brian) , Dan of Zephyrhills, FL (children Jennifer, John, Timmy, Katie Mears), Brian and spouse Linda of Miami,FL, sisters Peggy McGuinness of Jacksonville and Maura Grady McGuinness (children Michael, Cailen Grady Gebhardt). Pat was predeceased by brothers Kevin and Michael (child Kara McGuinness Newman). Pat was extremely generous with his time and was a mentor to many in his profession and a savior to many families with personal legal problems. Pat's favorite song was "it's a Wonderful World" by Louis Armstrong and he totally dedicated himself to making the world a better place for as many people as he could. To commemorate Pat's life, please make a contribution in his name to the Innocence Project (InnocenceProject.org).

Patrick Thomas McGuinness, long time Jacksonville resident and well-known criminal defense attorney, passed away on Monday, March 22, 2021, after a long fight against a rare form of blood cancer. A second generation Irish American and one of... View Obituary & Service Information

The family of Patrick McGuinness created this Life Tributes page to make it easy to share your memories.

Send flowers to the McGuinness family.