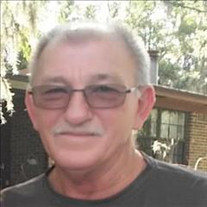 Robert Varnadore Jr, 66 died unexpectedly November 13th, 2020 at his home. He was born October 4th, 1954 in Waycross GA. the son of Robert & Pearl Virginia (Harris) Varnadore. Robert graduated high school, and then met the love of his life. He married Lucinda E Johnson in 1975. They raised 3 children together and weathered many storms together during their 42 years of marriage before she passed away on November 14th, 2017. Robert was a dedicated and hard working man. He started working at Sysco of Jacksonville 27 years ago as a truck driver. He built his career with hard work and good work ethics. All that hard work got him the title of Transportation Supervisor. He loved his job! When Robert wasn't working he was spending time with his children & grandchildren. He was the Best Dad & Papa. He enjoyed boating, fishing, and glass bottle cokes. Even though his wife and kids were Georgia Bulldog fans, Robert stayed true to his Florida Gators. He was well respected by everyone he met and touched many lives during his 66 years. Mr Varnadore is predeceased by his father Robert Varnadore Sr. His mother & father in law Geraldine & William Johnson. Beloved wife Lucinda E Varnadore. 1 brother Erwin, 2 sisters Daisy & Lucile, and 2 brother in laws Wayne Hersey & Paul James. He is survived by his mother Pearl Virginia (Harris) Varnadore. 4 sisters Sylvia Hersey, Margaret James, Teresa (Jimmy) and Cindy (Louis). 2 brothers Donald (Patricia) and Ray. He also leaves behind 3 children and 5 grandchildren. Jennifer (Scott) and 4 of Papa's Babies Chloe, Zane, Harper, & Mariah. Brandie (David) and his newest champ Weston. Last but not least his only son Robert W Varnadore. In addition all of his nieces & nephews, great ones too. Robert's family was just as big as his heart, and because of this he also leaves behind many people who cared for him from coworkers to lots of kids who looked up to and respected him because he was the neighborhood Dad everyone loved even if he had to put them in their place a time or two. He will be truly missed by everyone. Robert's family will be holding a memorial service for him on November 21st from 2-4pm. It will be held at Naugle Funeral on 702 Margaret St

The family of Robert Varnadore, Jr created this Life Tributes page to make it easy to share your memories.

Send flowers to the Varnadore family.