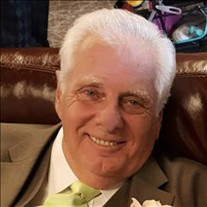 Robert Vincent Wolf, age 78, of Jacksonville Florida, was called home to be with the Lord on October 12 , 2020 surrounded by his loving family. He was married to the love of his life Sandra Wolf in 1974 who survives him. Robert is also survived... View Obituary & Service Information

The family of Robert Vincent Wolf created this Life Tributes page to make it easy to share your memories.

Send flowers to the Wolf family.