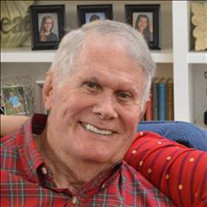 Ronald Wallace Stine Ron Stine, 77, died March 3, 2022 with his loving wife Claire at his side. Ron was born March 17, 1944, in Detroit Michigan to parents Howard and Alice Stine. His father was a drugstore manager and his mother a talented seamstress and devoted homemaker. Together with his parents and older brother Howard, the family relocated to Florida when Ron was about five years old. Ron attended Robert E. Lee High School, graduating at age 17 when he immediately enlisted in the United States Air Force. Upon discharge, he served in the Air National Guard Reserves and attended college earning a bachelors degree in building construction from the University of Florida, all while married to his first wife Ginny with whom he had two children Stacia and Lee. Though the marriage didn't last forever as planned, they remained lifelong friends. Ron had a successful career in the building construction industry where he met his second wife Claire. Claire had two young children from a previous marriage, Jenny and Steven, whom Ron helped to raise just as his own. Ron's career included commercial and residential building construction projects working for local well know contractors such as M. E. Elkins, Tompkins-Beckwith, and Tom Trout. He retired in 2016 from the City of Jacksonville, Public Works Department, as an appointed, Project Manager with 20 years of service. His construction projects were varied and included new home construction, high end remodeling, a desalinization plant in Cuba, nuclear power plant construction, along with numerous projects for Anheuser-Busch, J. M. Family Enterprises and the City of Jacksonville. Ron is preceded in death by his parents, Howard and Alice Stine. Ron is survived by his wife of 36 years, Claire, children Stacia (Tommy), Lee (Heather), Jennifer (Bobby) and Steven (Alexis), grandchildren, Worth (Terri), Clinton, Ginger, Holly (Todd), Wallace, Pierce, Ryan, Emma, and Maverick, and brother Howard (Ardell). He is also survived by extended family and friends to which he and Claire are forever grateful for all their love, kindness and support. In lieu of flowers, the family requests donations be made to Community Hospice of Northeast Florida (4266 Sunbeam Road, Jacksonville, Florida 32257) who provided Ron with exceptional care and compassion, or a charity of your choice.

Ronald Wallace Stine Ron Stine, 77, died March 3, 2022 with his loving wife Claire at his side. Ron was born March 17, 1944, in Detroit Michigan to parents Howard and Alice Stine. His father was a drugstore manager and his mother a talented... View Obituary & Service Information

The family of Ronald Wallace Stine created this Life Tributes page to make it easy to share your memories.

Send flowers to the Stine family.