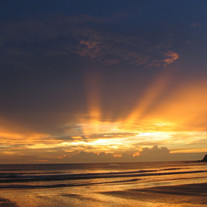 RUDY LORENZO GANTT SUNRISE JUNE 29, 1933 SUNSET MAY 9, 2020 Rudy was the second child of Cyrus, and Cecilia Gantt. Their first child was Vivian (Gantt) Henderson At the age of 7 yrs. old Rudy went to Philadelphia, Pa. to live with his maternal aunt, Edith (Graham) and her husband Oney Taylor. They soon moved to Camden, N.J. where Rudy flourished, being raised in a loving, religious home. Having been gifted with a beautiful baritone voice, Rudy sang in church, school and even neighborhood groups. He played the clarinet in school and loved any kind of sports. In 1951 he graduated from Camden High School, and married Ruth Syvera Brown who was the love of his life. They created a home that was open to everyone, and filled with love, laughter, and plenty of food. They celebrated 59 wonderful yrs. of marriage before she was called home in 2010. To this union was born, 3 children. Johanna, Joyce (predeceased) and Stephen. Throughout their marriage, God and family were the most important factors in their lives. In 1957 Rudy procured a job, which afforded him an education, as well as travel, beyond his imagination. Being thirsty for knowledge, he took advantage of everything they offered him. Not only did he learn the intricacies of keeping a ship moving, but he learned of other countries, cultures, and religions, and their cuisines. Rudy was a very charismatic, gentle giant. When he wasn't watching sports, or cooking massive amounts of wonderful food, he enjoyed intense, and stimulating conversations, or regaling his many experiences throughout his life. Around 1988 Rudy started experiencing health issues that would force him to stay on land. He took the opportunity to start working with his union, which was something he had done off and on throughout his career. This was just another experience. Different tools, different traveling, and more learning. Rudy's entire life was a challenge, and he thrived on it. When his health would no longer allow him to work, he was forced to retire around 2000. He had traveled the world at least 3 times and had just been promoted to Vice President of the National Maritime Union. In his retirement, he enjoyed watching and feeding his growing family. He didn't need a holiday to prepare a feast. He started telling his stories as well as perfecting and expounding, his cooking skills. His family loved his stories, and he loved telling them...... and the stories would always end with him saying, with a tear in his eye......." It's been a wonderful life!!"; Rudy leaves, to celebrate his life, his two surviving children, Johanna and Stephen, 6 grands, Cherise (Harris) Bullock, Jaime Freeman, Tyrone Gantt and his wife Kesha, LaMont Harris, Sabrina (Gantt) Davis and her husband Michael and Rudy Freeman. 16 great grands Brittany, Qur'an, Dejah, Nia Laren, Nadja, Christian, Nathaniel, Xiomara, Jordan, Samiya, Greyson, LaMont III, Serenitii, London, Dominic, and Praise. His special friend, Jeanne Phelps, and a host of nieces, nephews, cousins, and friends. Psalm 23

RUDY LORENZO GANTT SUNRISE JUNE 29, 1933 SUNSET MAY 9, 2020 Rudy was the second child of Cyrus, and Cecilia Gantt. Their first child was Vivian (Gantt) Henderson At the age of 7 yrs. old Rudy went to Philadelphia, Pa. to live with his maternal... View Obituary & Service Information

The family of Rudy Gantt created this Life Tributes page to make it easy to share your memories.

Send flowers to the Gantt family.