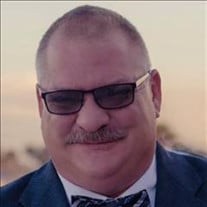 Steven William Rapasky October 30, 1963 - June 15, 2022 Steven William Rapasky age 58, of Jacksonville, Florida, passed away on June 15, 2022. Along with his twin brother, John Edward Rapasky, Steven was born on October 30, 1964 in Morgantown, West Virginia, to Father, John William Rapasky and Mother, Peggy Jo Rapasky. Steven married Dorothy Marie Rapasky on December 21st, 1985. Together, they shared three children, Steven Anthony Rapasky, Lewis Philip Rapasky, and Ashley Marie Rapasky (Ranaldi). Amongst his wife and children, Steven is survived by his Grandchildren Skye, Jude and Stella Rapasky, Logan, Lyla and Luca Ranaldi. He is also survived by his son in law Thomas Ranaldi, and his daughter in laws Camela and Alexandria Rapasky. Nothing can replace the love and devotion he had for his family. Through hard work and determination, he achieved great success in his chosen fields. Steven proudly served the US Navy for 22 years and retired as Chief petty officer. After retirement, Steven became a contractor for the government at the United States Naval Station in Mayport, FL. Steven loved spending his days boating on the water with his family, fishing, snorkeling, and wrestling with his dogs Lola, Kiwi and his late dog Misty. They never left his side. Steven was a passionate, kind, caring person whose greatest achievement was the positive impact he had in the lives of all who knew him. He will be greatly missed by his family, and friends. May he rest in peace.

The family of Steven William Rapasky created this Life Tributes page to make it easy to share your memories.

Send flowers to the Rapasky family.