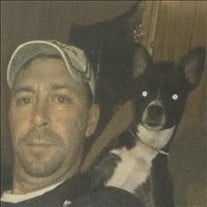 Terry M Mattox, 43, died January 8, 2022 at his home in Jacksonville, Florida, county of Duval. He will be laid to rest by cremation at Naugle Funeral Home. Mr. Terry was born on October 12, 1978, in Jacksonville, Florida. He was the son of Terry Lee and Debra Mattox. Terry also had two sisters, Crystal Simpson and Ann Delk left behind. Terry was also the dad of two children Alison and Tyler Mattox. Tina Newcomb was the girlfriend of Mr. Mattox who had found him on the floor after suffering a seizure. She called Jacksonville Rescue once on scene and Mr. Mattox was pronounced deceased. Terry was the nephew of Erick Latak, Jennifer Latak, Tammy Ortagus, Glen Ortagus, Christopher Halt, Jeff Gapinski, and Mark Daily. Terry was the uncle of Chase Mattox, Cody Mattox, Leah Mattox, Dayton Mattox, Emily Ortagus, Shane Latak, Austin Latak, Alex Latak, Shannon Rush, Allan Rush, Braxton Thomas. God has you in the palm of his hands. No more suffering no more hurt. Terry you will be truly missed. "I know heaven is a beautiful place, because they've got you." In lieu of flowers, donations can be made on behalf of the family to Naugle Funeral Home.

The family of Terry Michael Mattox created this Life Tributes page to make it easy to share your memories.

Send flowers to the Mattox family.