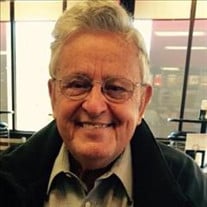 Walter R Wenger, 89, of Jacksonville, FL, passed away Friday, June 26, 2020 at St Vincent's Hospital. Born November 3, 1930, he was the son of the late Lester R. and Helena (Sherr) Wenger. A native of Lancaster, Walter moved to Jacksonville nearly thirty years ago and made Jacksonville his home. A veteran of the U.S. Navy, Walter was proud of all the places he got to see around the world during his tour of duty on the USS. Tarawa. Walter spent many of his working years as a over the road trucker and never tired of driving, even when he was off the job. Walter loved to talk to everyone he met. Telling stories and jokes was his favorite activity, and he loved meeting people wherever he went. He attended First Baptist Church of Jacksonville and also worked there for a time as a bus driver and parking garage attendant. He is survived by a daughter, Cindy Wenger of Milton, PA and a cousin, Joanne Moore of Lititz, PA, 5 step children, 9 grandchildren, and 10 great grandchildren, and by his long-time friend, Melvin Lapp. Walter was preceded in death by his wives Janet (Burns) Wenger and Reba (Thomas) Wenger, and cousin Robert Sherr. A memorial service will be held at a later date in Lancaster Local arrangements under direction of Naugle Schnauss Funeral Home & Cremation Services, 808 Margaret Street, Jacksonville, Florida 32204, 904-683-9288

The family of Walter R Wenger created this Life Tributes page to make it easy to share your memories.

Send flowers to the Wenger family.