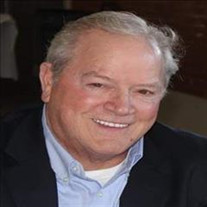 Mr. Wendell James Exline, age 73, of Jacksonville, Florida, passed away unexpectedly at his home on Wednesday, September 1, 2021. He was born on April 9, 1948, in Pollock, Louisiana, to John James and Hilda Marie (Carroll) Exline. Jim was a loving husband, father, grandfather, brother, uncle, and friend. After serving 8 years in the US Navy, he met the love of his life Debbie, settling in Jacksonville. While raising their children, he served as father, pastor, baseball coach, go kart pit crew, and a wide variety of jobs he could fix anything from a faucet to a multi-megawatt generator. With his family grown, Debbie and Jim departed Jacksonville with camper in tow, spending wonderful years making great friends all over the southeast and beyond. Known as "Papaleaux" to his grandkids and great grandkids, he filled their lives with joy and love. Jim was preceded in death by his parents; and siblings, Danny "Mooney" Exline, Johnny "Jack" Exline, Peg Exline, Pat Exline, and Lola Black. He is survived by his wife Debra; sons, Johnny Exline of Florida, Richard Exline (Beth) of Jacksonville and Pete Exline (Jessica) stationed in Maryland; and daughter Shirley Bohn of Louisiana; brothers, C.M. B-Line Exline (Lou), Billy Zack Exline, and Tommy Dale Exline, all of Louisiana; sisters, Linda Diane Exline, Polly Exline, and Betty Knight, all of Louisiana; numerous nieces and nephews and other family; and lifelong friends, Robert Pygott (Janet) of Jacksonville and Scott Maus (Jerri Lynn) of Kingsland, Georgia. Funeral Services will be held at 11:00 a.m. on Monday, September 6, 2021, at Naugle Funeral Home at 1203 Hendricks Ave, Jacksonville, FL 32207. The family will receive friends one hour prior to the service at the funeral home.

Mr. Wendell James Exline, age 73, of Jacksonville, Florida, passed away unexpectedly at his home on Wednesday, September 1, 2021. He was born on April 9, 1948, in Pollock, Louisiana, to John James and Hilda Marie (Carroll) Exline. Jim was a... View Obituary & Service Information

The family of Wendell James Exline created this Life Tributes page to make it easy to share your memories.

Send flowers to the Exline family.