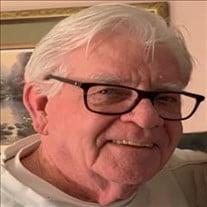 Dr. William Howard Caldwell, 83, passed away in Jacksonville, Florida on March 29, 2022. Born in Baltimore Maryland, Bill grew up in Salisbury and received his undergraduate degree from Washington College. He earned a PhD in Mathematics from Rutgers College in New Brunswick, NJ where he welcomed his daughter, Cheryl, and son, Stephen, into the world. Following his post graduate work, Bill took a job at the University of South Carolina where he was a popular professor of mathematics and made many life-long friends. From Columbia, SC he moved to Jacksonville, FL where he was an original faculty member at the University of North Florida and the Chairman of Mathematical and Computer Sciences. There, he was instrumental in securing the Osprey as the university's mascot. He served on the Board of Regents for Higher Education in Tallahassee, FL where his friends set him up with his future bride, Della, who was traveling for a conference. Throughout his years, he spear-headed many programs for under-privileged students along with various scholarships and competitions centered around math and science, but perhaps the accomplishment of which he was most proud was his work as the founder of The Sunshine State Scholars, a program that currently recognizes and promotes Florida's highest caliber STEM students. Bill and Della traveled extensively, visiting nearly every nation on the planet and amassing beautiful memories together. He enjoyed golfing, boating, fishing, reading, cooking, playing with his grandchildren, and attending concerts and sports events. His famous Thanksgiving dinners and 4th of July parties were attended by faculty, students, and his growing family. Bill loved to sing and play the ukulele. He performed in a barbershop quartet as a tenor, several Shakespearian plays, a variety of musicals, and (to the chagrin of his children) while standing in line for anything from a movie to the grocery store. He might well be remembered for his incessant puns, and though some were pun-ishingly bad, many were pun-derfully clever and over the years they have groan on us. If you only had one word to describe Bill Caldwell, that word would be impact. The first to lend a helping hand, to offer assistance with no strings attached, he was a man who showed up. His confidence in your ability helped you believe in yourself. No doubt, the ripples of his impact will flow into the future for generations to come. His greatest love was and always will be his family and he taught us all with his actions to put each other first. He is survived by his wife, Della, his children Cheryl, Stephen, Tom, their spouses Jamie, Robin, Kit, and Kim, his grandchildren, Annalee, Ben, Tom Henry, Ryn, Grace, Charley, Kamala, Kaiti, and LouE, along with his sisters, Carol (Jack), Kathy (Jim), and Penny. He was predeceased by his parents, James and Dorothy, his brothers, James and Robert, and his son, Louis. A celebration of life will be held at UNF in the University Center, Board of Trustees Room, Building 43, 12000 Alumni Dr on Monday, April 11 from 1-3 pm.

Dr. William Howard Caldwell, 83, passed away in Jacksonville, Florida on March 29, 2022. Born in Baltimore Maryland, Bill grew up in Salisbury and received his undergraduate degree from Washington College. He earned a PhD in Mathematics from... View Obituary & Service Information

The family of William Howard Caldwell created this Life Tributes page to make it easy to share your memories.

Send flowers to the Caldwell family.