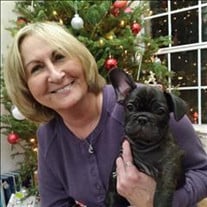 Peggy Loretta Boyd St Johns, Florida � Peggy L Boyd, 68, died June 2022, at her residence. She was born April 5, 1954 in Kershaw, South Carolina, the daughter of Lloyd Alex Boone of Kershaw, South Carolina and Helen Anderson Boone of Deerfield, Illinois. Peggy graduated from Baron DeKalb High School, class of 1973. Following graduation, she served in the U.S. Navy. Some of her duty stations included VA-42 NAS Oceana VA, Supply Dept NAS Whiting Field, FL, AS "A" School NATTC Memphis, TN, AMD NAS Moffett Field, CA, RTC Orland, FL, NAVSTAN Roosevelt Roads, PR, and AMD NAS Jacksonville, FL. After serving 20 years in the Navy, she retired in November 1994. In 1974, while stationed at NAS Oceana VA, Peggy met and married Robert (Bob) Boyd. They had one daughter in 1986, Aimee Renae (Boyd) Aleman. While in the Navy she received her Associate in Arts degree July 18, 1992 and her Bachelor of Arts degree in Business May 15, 1999; both from Columbia College. She earned her Master of Business Administration August 31, 2004 from the University of Phoenix. After her Navy retirement, Peggy had a second career as Payroll Manager for Homeside Lending, Inc., PGA Tour, Inc., and Payroll Director for Acosta, Inc., retiring from Brand/Safeway as the North American Payroll Director in December 2021. Peggy was predeceased by a brother Ted David Boone. Surviving her are her parents, one sister Teresa Boone Taylor, her daughter Aimee Aleman and husband Luis Aleman, and two grandchildren Lisa-Marie Tyler and Kayden Aleman. Memorial Services for Peggy will be held at the Jacksonville National Cemetery July 1, 2022 at 11 a.m. In lieu of flowers the family is asking that you donate instead to Mayo Clinic, St Jude's, or Wounded Warrior in Peggy's honor.

The family of Peggy Loretta Boyd created this Life Tributes page to make it easy to share your memories.

Send flowers in honor of Peggy.